How should we understand the rise of the ‘selfie’? Is this just a manifestation of mass narcissism, or do these new forms of self-representation provide other social and cultural possibilities?

Last year, a 24-year-old British tourist named Eleanor Hawkins was arrested after taking a semi-naked selfie on top of a mountain in Malaysia. Hawkins was found guilty of committing ‘obscene acts in a public place’, fined and sentenced to three days in jail. The case was discussed largely in terms of an apparent clash of cultures, between the traditions and values of the local population and those of twenty-first-century Western young people. However, it also says a great deal about the pervasiveness of media – the sense that mediation now happens anywhere and everywhere, including on remote mountain tops in Malaysia.

The story of Eleanor Hawkins’ selfie might be read as a cautionary tale. Although it’s not clear whether the images were shared online, it’s entirely possible that they could have been uploaded instantly, even from the top of the mountain. According to a recent Guardian report, wi-fi is now available to climbers on Japan’s Mount Fuji. Media are everywhere to be consumed, but so increasingly are the means to create and distribute media.

A new exhibition at London’s Tate Modern, Performing for the Camera, provides a wider historical and cultural context for thinking about these new forms of self-representation. As the title suggests, the exhibition focuses on the idea of self-representation as a kind of performance. In choosing to represent ourselves in particular ways, we are not necessarily reflecting some kind of truth about who we really are: rather, we are performing different ‘selves’, or different versions of identity. To this extent, the selfie can easily be understood in terms of contemporary theories of identity, most obviously the work of Judith Butler. 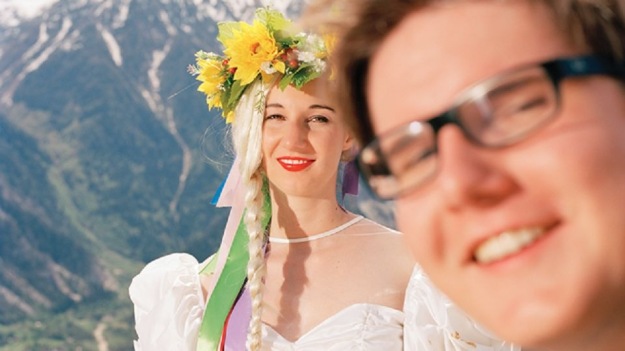 The Tate exhibition begins with some examples of artists who have used the camera to record varieties of performance art, but it moves on to those who have deliberately staged and photographed different kinds of ‘identity performance’. Here the camera becomes a constructive tool, not just a neutral recorder. Some of this work – most notably the photographs of Francesca Woodman – seems highly ‘personal’, while in other cases – such as Cindy Sherman and Samuel Fosso – we see artists using self-portraits to comment on mainstream media representations. And towards the end of the exhibition, there are artists like Amalia Ulman who use the conventions of the selfie to create complex narratives about identity.

Of course, there is a long history of self-representation in Western art, dating back at least to the Renaissance. It could be argued that the growth of self-representation is tied up with the growth of ideas of individuality that emerged with the origins of modern capitalism. Most famous artists have painted ‘selfies’, and the first photograph ever taken (by Robert Cornelius in 1839) was a self-portrait. Some theorists have argued, in line with the ideas of Michel Foucault, that selfies – like other aspects of social media – are a symptom of the self-surveillance that is typical of contemporary society. In the modern world, we are constantly being watched, but we are also constantly watching ourselves, monitoring our public image, and working on how to present (and represent) ourselves to the wider world.

However, much of the contemporary public discussion of selfies – and a good deal of academic research – is framed in terms of media effects. From this perspective, taking selfies both reflects and reinforces particular social or psychological disorders. For example, the pervasiveness of selfies is often seen as a manifestation of increasing narcissism in society. Psychological researchers have explored the relationship between people’s use of selfies and personality traits like inflated self-importance, self-regard and exhibitionism – although they don’t provide conclusive evidence about whether selfies are a cause or a symptom of such things. This argument often feeds into broader stories about social decline, whereby the media are seen to be destroying traditional forms of civilized social interaction.

This also takes on a gendered dimension, when selfies are accused of sexualizing girls and young women, or encouraging them to sexualize themselves. Obviously, it’s all about the look, and there’s no doubt that many people seek to create flattering self-portraits. They try to make themselves look ‘attractive’, and they tend to do so in fairly conventional ways – although it is worth noting the Snapchat craze for comical and deliberately ugly selfies. In general, there’s a strong age and gender dimension to this discussion: selfies are often seen to be a preoccupation for teenage girls, who are assumed by definition to be stupid and vain – despite the fact that there are plenty of other people who are taking them. 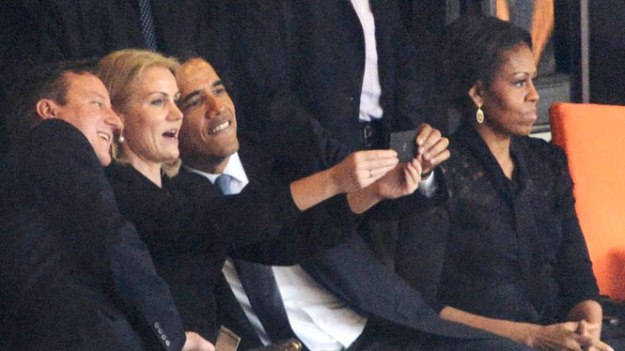 There are definitely risks here, especially given the ease with which digital images can be circulated. But it’s also possible to overstate the phenomenon, as the moral panic about ‘sexting’ shows. Here again, there’s an oversimplified story about media power – as though the media have some magical ability to transform innocent children into sex-crazed exhibitionists. While some argue that young women (and men too?) are ‘objectifying’ themselves, others suggest that selfies can also be empowering.

Another aspect of this – and another perennial topic in debates about media effects – is the idea that selfies have a distorting effect on our ideas about body image. For example, a recent press report described how selfies are causing an epidemic of ‘dental dysmorphia’, as we realise that our teeth don’t look good and sign up for cosmetic surgery. The evidence of any causal connection here is pretty much non-existent. But once again, the media are blamed for making us all neurotic and miserable – as though a preoccupation with one’s personal appearance was somehow a recent phenomenon.

What can a Media Studies perspective offer here? Aside from looking at the historical and cultural aspects of this practice, and questioning these simplistic ideas about media effects, we also need to look at media use as a form of social communication. This means asking basic questions about who uses this medium, when, where and how, and for what purpose.

Taking selfies is what some call a vernacular or mundane media practice. It overlaps in this respect with the family photo-album or home movie- or video-making, which I have written about elsewhere on this site. Like home video-making, its significance is not only about the actual images themselves, but about the social relationships that they sustain and potentially create. These relationships are most obviously with friends and family, but when images are shared on social media, they are also about wider public audiences. When we share a selfie, we are saying ‘look at me!’ We are addressing an audience, and the images we share depend upon what we know and assume about that audience.

So the taking and sharing of selfies is subject to social rules and conventions, which are likely to be interpreted in different ways by different people in different contexts, and to change over time. For example, how do we decide where and when it’s appropriate to take a selfie? How do we decide what to show and not show, and what poses and facial expressions to strike? Where and with whom do we decide to share these images, and why?

These conventions are not completely new: they relate to earlier traditions and genres of representation. Our choices of camera angles, lighting, gestures and poses, and how we prepare our appearance – as well as which images we select to share or instantly delete – all reflect wider assumptions about how images are constructed, and what functions they serve. For example, do we want our selfies to appear authentic or fake, serious or comical, realistic or fantastical – and how do we want our audience to see us in these terms

In a recent interview, the photographer Martin Parr described photography as ‘the most democratic art form in the world’. There’s certainly some truth in this. With smartphones, we all have the means of representation (and self-representation) in our pockets, and the opportunity to distribute what we create. However, this doesn’t necessarily mean that we have absolute power or control over what we do – as Eleanor Hawkins discovered to her cost.

NOTE: I’m currently experimenting on this blog with writing that’s targeted more at students and at a general readership. The aim is to take current media phenomena and link them to Media Studies research and theory, but with a light touch. I’ll continue to write pieces aimed mainly at specialist teachers and researchers, but I’m also trying to write things that will be more widely accessible. Like my earlier posts about Rihanna and YouTube vloggers, this is one of those posts. There may or may not be more to come…

4 thoughts on “Self, self, self: representing the self in the age of social media”