The politics of If…. are to some extent a matter of its style. One of Anderson’s constant reference points in the making of the film was the theatrical work of Bertolt Brecht. He had seen a considerable amount of the German author’s work at first hand in 1965, when Brecht’s Berliner Ensemble company has staged a season at London’s Old Vic (Anderson befriended the directors and actors, and apparently organized the closing night party). As a committed Marxist, who chose to work in East Germany, Brecht wanted to use theatre for didactic political purposes. In doing so, he sought to challenge ‘bourgeois’ approaches that were based on naturalistic observation. Realism, as Brecht defined it, was not about surface appearances but underlying essences. As Anderson put it in his self-interview: ‘Brecht said that realism didn’t show what things really “look like”, but how they really are.’ A further element of Brecht’s approach was what he termed the ‘Verfremdungseffekt’ – the attempt to ‘defamiliarise’ or even ‘alienate’ the spectator from the events on stage. Through a whole range of techniques, Brecht sought to defuse the audience’s emotional identification with the characters, in order for them to understand and debate the broader issues at stake. 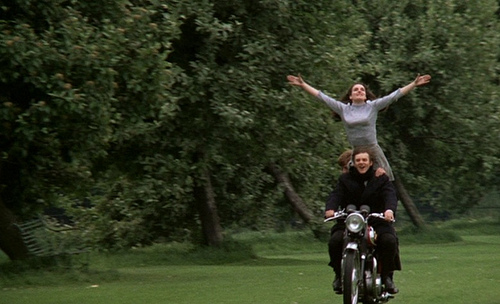 Some of these techniques are evident in If…. – and (as we shall see) to an even stronger extent in Anderson’s subsequent film O Lucky Man! Like many of Brecht’s plays, If…. is broken up into separate ‘chapters’, with white-on-black intertitles; and some of the titles clearly indicate broader themes or make intertextual references (‘ritual and romance’ and ‘forth to war’, for example). Famously, the film also shifts between black-and-white and colour. As I’ve indicated, this was done partly for economic reasons, although these reasons do not always seem to apply: the scene in the transport café, for example, is shot in both black-and-white and colour. Some critics have attempted to assign a consistent symbolic significance to these shifts, albeit without much success. At least in terms of their potential effects on the viewer, they are probably better seen as instances of Brechtian ‘defamiliarisation’: they momentarily draw attention to the fact that we are watching a film, and not gazing through a window onto the world.

Anderson also uses other texts within the film as a kind of commentary on the action. This is particularly the case with the collages of images that adorn the pupils’ common rooms and studies: there are some very specific references here (to which I’ll return), but in general what we see are images of conflict, war and violence, as well as sex. The collages also illuminate and comment on the characters, occasionally in rather heavy-handed ways: Mick expresses enthusiasm for an image of a black guerrilla toting a machine gun, which becomes the centre of his display, as well as for images of lions; while the prefect Denson is seen against images of school, religious ceremony and military scenes. This approach helps to define the characters as what Brecht calls ‘social types’ rather than unique individuals. 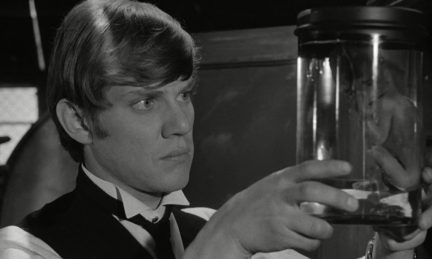 More broadly, there are elements where the film moves beyond conventional naturalism and into the realm of fantasy – although the line between them is not always clearly marked. This is evident, for example, when Mick and the café waitress engage in a mock lions-and-tigers fight before apparently having sex; and in the self-consciously staged and half-hearted nature of the military exercises. It is especially notable when the headmaster pulls the chaplain out of his bookcase drawer and asks the three rebels to apologise to him. This latter scene was questioned by Paramount executives, and subsequently by some critics, who found it clumsy and laughable – although Anderson insisted that it was a necessary preparation for the film’s conclusion: ‘After that, anything can happen,’ he wrote. ‘It makes the end of the film possible’.

Indeed, as the film proceeds towards its violent denouement, these disruptions of conventional naturalism begin to mount up. The scenes featuring the housemaster’s wife, in the bedroom and then later wandering naked in the dormitory, border on surrealism; and when Mick and the others clear out the cellar underneath the stage, they find a whole range of bizarre props, including a stuffed crocodile (which they proceed to burn) and an embalmed human foetus in a jar. Of course, one might claim that the cellar represents the sub-conscious, and it would be possible to generate all sorts of symbolic explanations here; but the overall effect is to move the film beyond surface naturalism, and to blur the boundaries between reality and fantasy. (In terms of cinema, the obvious point of reference here would be the films of Luis Bunuel: Anderson occasionally wrote about Bunuel as a film critic, although he does not refer to him very frequently.) 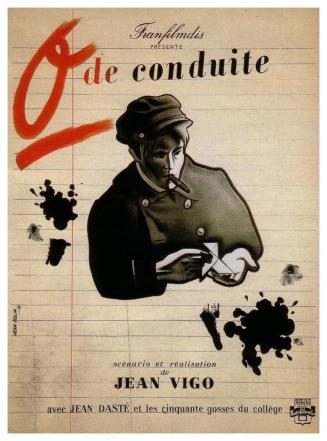 However, there are other influences on the style of If…. In developing the script, and in subsequent commentary, Anderson frequently describes the film as having a ‘poetic’ approach – a term that seems rather at odds with the more rationalistic, political style of Brecht. One of his main points of reference was the 1934 film Zero de Conduite [Zero for Conduct], directed by Jean Vigo – a film that he watched a few times in the months before shooting, in order (as he put it) ‘to give courage’. The structure and perspective of Vigo’s film are broadly similar to those of If…. The pupils in the school are shown resisting the teachers’ and the prefects’ attempts at discipline: they smoke, fight and climb the classroom walls. When one of the teachers steals their precious food, and the headmaster tries to put a stop to a romantic relationship between two of the boys, the pupils seek revenge. The authority figures in the film are roundly mocked (the headmaster is played by a dwarf with a fake beard), although one of the teachers is a more likeable eccentric with a line in Charlie Chaplin impersonations. The film culminates on Commemoration Day, with the boys on the school roof throwing shoes and other paraphernalia down at the visiting dignitaries. Despite the boys’ cries – ‘war is declared!’, ‘up with revolution!’ – Zero de Conduite is less obviously ‘political’ than If…. The boys are naughty and playful, but they are younger and less dangerous than Anderson’s adolescents.

The influence of Vigo’s film was also to do with its ‘poetic’ style, however. If…. certainly has some more poetic moments, most notably a night-time montage sequence and the scenes of the housemaster’s wife. Again, these elements tend to come to the fore towards the end of the film, by contrast with the more naturalistic scenes with which it begins. On the other hand, the early sequences of both films are also somewhat episodic: in both, the revenge theme that drives the narrative only kicks in at a fairly late stage.

More generally, like many of Anderson’s other films, If…. is replete with references to literature, and to other films. As well as Kipling, there are echoes and lines from Wordsworth, Tennyson, Byron and Blake, as well as scenes that appear to draw on some of Anderson’s favoured film directors, including Ford, Lean and Jennings. (Erik Hedling’s book on Anderson catalogues countless examples of these references.) The choice of hymns sung in the chapel at the opening of several ‘chapters’ is highly pointed. The film is clogged with ‘quotable’, epigrammatic lines and speeches, as well as a great deal of self-conscious symbolism (Mick places a plastic bag over his head, one of the boys watches cells reproducing under a microscope, Denton confiscates Mick’s necklace made of his own teeth). In some respects, the film seems almost to have been designed for pretentious critical explication on the part of film academics – although this was an approach that Anderson predictably condemned in an essay called ‘Critical Betrayal’. At the same time, this dense forest of references might create another kind of distancing or ‘defamiliarisation effect’ – at least for those who are sufficiently well-informed to recognize them. Yet, like some of its characters, the film seems at times to be rather too knowing and clever for its own good. 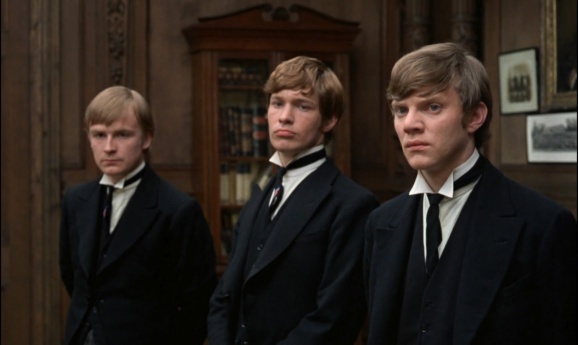 If…. may be ‘poetic’ and even avant garde in some ways, but its style of cinematography is quite straightforward. Anderson uses conventional establishing shots and shot/reverse shot patterns, and tends to cut on action. Unlike Godard for example, he mostly obeys the rules of ‘classical’ Hollywood film-making and editing. Anderson described the style of the film as ‘extremely sober’ and ‘straightforward’, and indeed as ‘traditional and conventional’. Perhaps with an implied reference to Godard, he differentiates his approach from ‘what we might call “trendy”, or eccentric, or showy technique’ that he felt had become popular in recent years.

There are certainly aspects of If…. that might be described as ‘Brechtian’, either in style or intention, therefore. However, they are to some extent in conflict with other aspects that might be called ‘poetic’ or literary, or simply naturalistic. Interestingly, David Sherwin later described If…. as Anderson’s ‘least Brechtian’ film, and there may be some truth in this.