One of the highlights of the opening night of Britain’s fourth terrestrial television channel in 1982 was a half-hour comedy programme entitled Five Go Mad in Dorset. Featuring some of the emerging stars of London’s post-punk ‘alternative’ comedy scene, this was a sharp parody of Blyton’s original stories, rather than a respectful homage. Set in the 1950s, the programme follows the four children and their dog as they cycle around the countryside foiling a plot by some dastardly thieves. Part of the joke is that the four children are played by adults – and there are several comments, especially about how the leading boy Julian is ‘very well developed for a ten-year-old’. In a brilliant coup de theatre towards the end, the ultimate villain is revealed to be none other than George’s Uncle Quentin, who is played with louche camp by Ronald Allen, one of the stars of the UK’s tackiest soap opera, Crossroads. 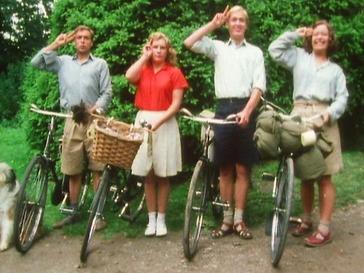 The Comic Strip’s parody reflects both the ideological and the literary criticisms of Blyton that I have discussed thus far. The plot is absurdly contrived, and full of improbable coincidences; the children are constantly worried that something ‘queer’ is going on. As in the originals, their adventures are regularly interrupted by lavish meals consisting of the same menu of cold meat and salad with ‘lashings of ginger beer’. Anne is described as ‘a proper little housewife’, and at one point is seen sweeping up the campsite; while George is dismissed by the boys as merely a ‘dyke’. While George appears to enjoy being ‘licked’ by her dog, Dick and Julian are also a little more than fraternal. When the children’s new friend Toby is kidnapped, they suggest that ‘it serves him right for being nouveau riche… and Jewish’. The criminals are bungling Cockney stereotypes, whose dialogue consists only of lines like ‘blah blah blah stolen plans, blah blah blah top secret’. In the conclusion, as Uncle Quentin is apprehended, he reveals that he is in fact ‘a screaming homosexual’ and that his wife Fanny is ‘an unrelenting nymphomaniac’.

A follow-up, Five Go Mad on Mescalin, appeared a year later. Here the children meet an appalling American, Mr. Budweiser, who is busily buying up examples of English heritage, along with his son Willy. The plot in this instance is to do with drug dealing. Dick is kidnapped and becomes a drugged-up hippy; and the ultimate villain, Doctor Love, is revealed to be none other than Uncle Quentin, who has escaped from prison (and once again confesses to being an ‘outrageous homosexual’). If the formula is very much the same, the satire here is equally sharp. The children have highly affected posh accents, and their conservative views seem to extend to sympathizing with the Nazis. Julian is again depicted as ‘extraordinarily fit’ – a quality he puts down to ‘compulsory sports and a decent private education’. Anne, meanwhile, is described by the boys as a ‘prick teaser’.

Unlike the books with which this essay began, the Comic Strip films are very clearly a parody of Blyton’s work itself. Aside from satirizing their racism, sexism and class bias, the childish innocence of the originals is disrupted by the constant sexual innuendos and references. To some extent, the programmes reflect how much views of children’s authors such as Blyton had changed over the preceding decades – although, as I go on to consider in the following sections, a recovery of Blyton’s reputation would shortly follow…

From modernization to heritage culture 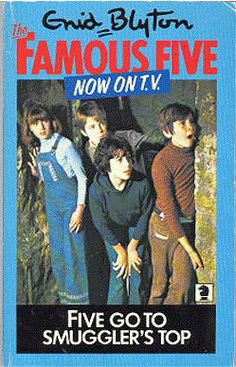 Attempts to modernize Blyton’s work were already under way in the 1970s. Aside from the publishers’ editing of the books, another indication of this was the first television adaptation of the Famous Five series, broadcast by Southern TV (a commercial channel) in 1978-79. Shot on film in 26 episodes, this was apparently the most expensive children’s television series to date at the time. Judging from comments on YouTube and on Blyton fan sites, it still seems to carry considerable nostalgic appeal for older enthusiasts: it merited a release on DVD as a ‘Complete Collectors Edition’ in 2012, and is frequently described as ‘classic’ by its fans. Yet the series shows its age almost more than the originals. The title sequence is accompanied by a bouncy 1970s pop song, and the cheesy incidental music (along with the flared trousers and dubious haircuts) are decidedly of their era. The adventures take place in rural settings, but the children now ride racing bikes and use modern(-ish) technology. The children are not obviously marked as middle- or upper-class, and the gender distinctions are also somewhat muted.

Updating and ideologically cleansing Blyton’s work may have been one option, but by the 1980s, an alternative approach was beginning to appear. Blyton’s books began to be rehabilitated as part of the wider ‘heritage culture’ that became popular at the time. At the end of her 1982 book The Blyton Phenomenon, Sheila Ray notes that Blyton is already starting to be added to the list of ‘classic’ children’s authors. As we have seen, more recent surveys of children’s reading unquestioningly use this term to describe her. One can now buy the ‘Complete Classic Edition’ of the 21 Famous Five books, with facsimile original covers, at a retail price of over £100. This is only one of several Blyton series to be reissued in this form. To be sure, this is partly about the length of time for which the books’ popularity has lasted. Blyton has acquired the patina of history. As the publisher’s blurb for these editions runs: ‘Having celebrated 70 fabulous years in 2012, it’s clear the Five are here to stay for a long time to come’. Reviews on Amazon suggest that these books are being bought by older people for their grandchildren, although Blyton’s continuing popularity among children themselves should not be underestimated. 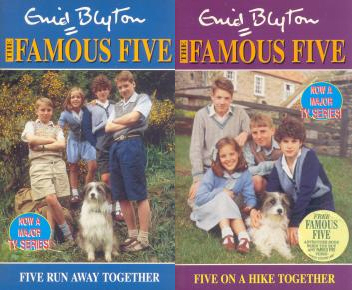 A further indication of this is the more recent series of The Famous Five, produced by Tyne Tees TV (another commercial channel) in the mid-1990s. (It is notable that the BBC continues to avoid Blyton.) Again, there were 26 episodes, covering all 21 books, broadcast in two series between 1995 and 1999. However, unlike in the 1970s adaptation, these series have the original period setting, although there is some limited modernization here. The children no longer use words like ‘golly!’ or ‘queer’; Aunt Fanny has become Aunt Frances; and the boys are shown doing domestic tasks (although the same cannot be said for Uncle Quentin). Anne remains somewhat ineffectual, but George appears to have become a stronger character. Nevertheless, this 1990s adaptation is overtly ‘retro’ in a way that the 1970s series is not. The adventures take place in picturesque pastoral settings, accompanied by lyrical classical-style music. Particularly notable here is the children’s extensive wardrobe of mid-century designer knitwear – indeed, so extensive that the continuity editor seems to have allowed them to wear several different outfits in the same scene.

As such, the series might be seen to offer a reassuring form of escapism; yet, after the Comic Strip, it is hard to read it entirely literally. The dialogue is leaden and stilted; the children are sickeningly goody-goody and appallingly clean; and the villains (many, though by no means all, either working-class or foreign) are grotesquely evil. Many of the plots contain elements that can only be played as pantomime or farce. Although he is unfortunately not portrayed by Ronald Allen from Crossroads, Uncle Quentin is presented as a professorial stereotype that verges on the camp. Of course, this is very much my own subjective response: it reflects my own distaste for costume drama, and perhaps a recent overdose of the Famous Five.

Yet this recovery of Blyton’s work as a form of ‘heritage culture’ can be seen as symptomatic of the times. Of course, there is a long history here, but in the 1980s there was a remarkable turn to the historical past in popular culture, and in tourism, museums and visitor attractions. Robert Hewison’s book The Heritage Industry: Britain in a Climate of Decline, published in 1987, offered a powerful critique of this tendency. Hewison was scathing about what he saw as the sanitization and commercialization of the past, and the exploitation of nostalgia for an imaginary golden age. As the subtitle of his book suggests, Hewison saw the rise of the heritage industry as a symptom of Britain’s economic decline, at a time of deindustrialization and globalization. The need to reinforce a threatened sense of national identity (and especially a particular version of ‘Englishness’) became a key theme, both in politics – in the resurgent conservatism of Margaret Thatcher and her successor John Major – and in popular culture. And yet, as John Corner and Sylvia Harvey noted at the time, these cosy, nostalgic images of rural England sat awkwardly alongside stories of aggressive enterprise and rampant capitalism. Meanwhile, others – such as the historian Raphael Samuel – argued that heritage culture had a democratizing potential, especially if it focused on the lives of ordinary people. Nevertheless, there is a fine line between the conservation of the past and its reinvention: heritage is not simply given, but actively constructed and produced.

It would be wrong to overplay Blyton’s ascent to ‘classic’ status. For most critics, she remains well outside the canon of great British children’s literature. Even today, she rarely figures in critical and historical texts in the field (she gains one passing mention in the monumental Crosscurrents of Children’s Literature, published in 2007, for example). By comparison, J.K Rowling, an equally popular author, has attracted much more attention from serious critics, and much more quickly. 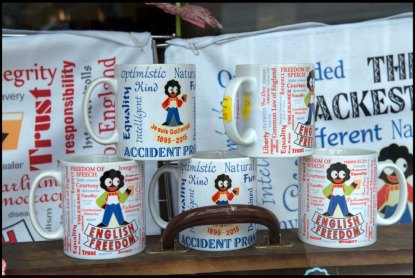 However, there is an extensive Blyton fan culture that is very much addressed to this notion of heritage. The Enid Blyton Society, formed in 1995, caters to ‘enthusiasts and collectors’ with a vast website, an 88-page magazine published three times a year, as well as an annual Enid Blyton Day. The website contains numerous scans of original covers and illustrations, as well as extracts, reviews and other information. It also hosts a forum that has over 4000 members, with almost 300,000 posts to date, as well as an archive and a monthly quiz. This is by no means the only fan site: EnidBlyton.net contains more message boards and reviews, while there are also individual fan sites based in Germany, France, Portugal, Spain and the Netherlands. Meanwhile, the official website EnidBlyton.co.uk sells a range of merchandise, and there is also an extensive market in original books, spin-off titles (not written by Blyton herself), TV annuals, comics, card games, jigsaws, and so forth. It is possible to attend Enid Blyton tours in Cornwall, which reportedly end in a replica 1940s parlour, and until recently there were two ‘Ginger Pop’ shops selling merchandise and memorabilia. (These shops closed down a few years ago, perhaps partly as a result of the notoriety their owner attracted for selling golliwogs, and her presentation of this issue in terms of ‘English freedom’ – see illustration.) Predictably, there is also a small amount of fan fiction, not least ‘slash fiction’ in which writers imagine sexual encounters between Anne and George, or Julian and Dick (although Timmy the dog has yet to feature, as far as I am aware).

Here again, it is my impression that the fans and followers of this ‘classic’ version of Blyton (especially in the Enid Blyton Society) are mostly elderly, but they are by no means exclusively so. Here, as in Amazon reviews of the books, many of the participants claim to be children; and they are very widely distributed around the world, as one might expect from the statistics about Blyton translations. In all these respects, there are some striking similarities between Blyton and Rowling, who also offers a particular variant on a staple genre of literary heritage culture, the school story – a genre that, despite its apparent ‘Englishness’, appears to enjoy global appeal.