As I have mentioned, one of the key claims made by Blyton’s defenders is that she is in some respects a ‘child-centred’ author. This claim begins to appear in the critical debate in the 1990s, and has often been repeated since. Like the other perspectives I have discussed, it also needs to be understood historically: it reflects changing views of the social position of children, as well as changing critical perspectives in literary and cultural analysis at the time. Before moving on to discuss these aspects, however, I want to consider the more biographical and psychological dimensions of this argument.

Some critics have sought to explain the apparent enigma of Blyton’s popularity with children by arguing that she remained in some sense a child herself. This argument was first made by the psychologist Michael Woods in an article published in 1969; the article was subsequently republished as an appendix to Blyton’s official biography, whose author (at least in her later revised edition) seems to have agreed with it. According to Woods, Blyton was ‘really a child at heart, a person who never developed beyond the basic infantile level’ – and it was this that enabled her to speak so directly to children. A few years later, in a 1975 BBC Radio broadcast, Blyton’s younger daughter Imogen Smallwood echoed this view: ‘she was writing as a child… with a child’s mind. I don’t think she ever grew up.’

Various biographical facts are cited to support this argument. As a child, Blyton had enjoyed a strong relationship with her father, and she seems to have been quite traumatized when he suddenly walked out on the family to live with another woman. Blyton left home as soon as she could, and distanced herself both from her own mother and her younger siblings: she did not attend her mother’s funeral some thirty years later (or indeed her father’s either). Meanwhile, when Blyton attempted to have children of her own, she was informed by her doctor that her uterus had not developed beyond that of a 12- or 13-year-old girl – a problem that was corrected by a course of hormone injections. The hypothesis, strongly hinted at by Blyton’s biographer Barbara Stoney, is that she was effectively arrested in her emotional development at the point when her father abandoned her.

This version of Blyton is dramatised in the 2009 biopic Enid, starring Helena Bonham Carter. It is, to say the least, an unflattering portrait (and was notably produced and broadcast by the BBC). Blyton emerges as a callous and domineering control freak. She manipulates her first husband, a publisher’s editor, in order to succeed in her career, and then drives him to drink and eventually dumps him when she finds a better option (a married man). She doesn’t appear to care much about her own children, banishing them to the nursery and preferring the company of her pet dog – although she fabricates an image of a happy family life for public consumption. (This account is, it should be said, supported by the memoir written some years later by her daughter, Imogen Smallwood.) In a sense, Blyton is seen to be replaying her own childhood abandonment into the next generation. Her writing offers a means for her to escape or return to an idealized fantasy of the happy childhood she enjoyed before her father left. Her extensive charity work and her close relationship with her child fans are represented, not as evidence of the ‘love of children’ she frequently professed in radio and television interviews, but as symptoms of some kind of self-centred, pathological repression.

There are reasons to be wary of this psychological explanation, however. Blyton did not display many child-like characteristics in her private life. She seems to have carried on several sexual affairs during her first marriage, including (rumours suggest) one with her children’s nanny. However neurotic she may have been, she was a ruthless and highly successful adult businesswoman. She was certainly single-minded about her work, but this is hardly an unusual quality among creative people.

Nevertheless, this view of Blyton as a ‘child-centred’ writer does find some support, especially among critics who have sought to rehabilitate Blyton, such as Nicholas Tucker and David Rudd. There are two main dimensions to this argument.

Firstly, it is children who dominate the world of Blyton’s books – at least those for older children, such as the Famous Five. For the most part, adults are marginal or conveniently absent, often for reasons that are barely explained. Adults undoubtedly provide for children – especially in the form of food – but the best adults are those who keep out of their way, or even abandon them to their own devices. Children are the powerful agents in this world: they initiate the adventures, and the villains they outwit and overcome are almost always adults. In a variety of ways – spying, eavesdropping, finding hidden documents, uncovering secret passages – they gain knowledge about the ‘queer’ goings-on of the adult world. Meanwhile, in the Famous Five and the Secret Seven series, the leading child characters (Julian and Peter respectively) are sometimes criticized for being too ‘goody goody’ and adult-like. Both groups are exclusive, internally bonded, child-only groups, which effectively operate as alternative families. 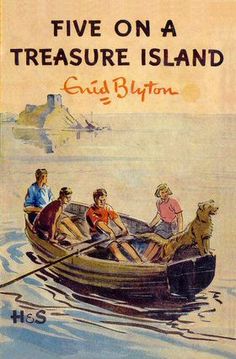 In this respect, the books represent something of the ‘lost freedom’ that the historian Mathew Thomson has described as characteristic of children’s lives in mid-century Britain. The Famous Five, for example, roam unsupervised around the countryside, rarely encountering cars (although significantly, they never go near a town). They have control over the physical space, venturing into some extremely risky situations that would have contemporary Health and Safety inspectors reaching for their clipboards. Yet these risks are only very temporarily threatening: the return to safety and security is never far away.

This claim to child-centredness is apparent not only in terms of the world Blyton represents, but also in her approach to her readers. For the most part, Blyton engages directly with her child readers, making little attempt to appeal to adults. This might be one reason why she is much less popular with adults than children’s authors who seek to do both (such as Milne); although this adult disapproval could in turn reinforce the sense of her books as a ‘child-only zone’, outside of adult control. As Nicholas Tucker suggests, ‘her books were child-centred in the same way as comics and annuals – literature without interest for adults, but where the child could reign, unfettered and supreme’. In this sense, applying adult standards of ‘literariness’ to her books is quite irrelevant.

The other side of this, of course, is that Blyton’s value as a marker of childhood may quickly disappear once children decide it is time to move on. Rudd notes how some children abruptly abandon Blyton during early adolescence, and only return to her work much later, with a very different perspective. The adult nostalgia I have identified is obviously not just a nostalgia for one’s favourite reading, but also for one’s own childhood.

These two sets of claims clearly relate to broader tendencies in thinking about childhood, and about children’s literature, that began to emerge around the end of the century. The child-centred world of Blyton’s stories reflects an emphasis on children’s agency and rights that was a key aspect of the so-called ‘new sociology of childhood’ that appeared in the 1990s – and which has now to some extent been institutionalized in some of the caring professions. The central emphasis here is on children’s autonomy and competence, and their right to have a voice in matters that concern them; but what is often celebrated is children’s resistance to adult power, whether in the form of direct challenges or in more covert subversion.

Meanwhile, the shift towards a more child-centred approach to children’s literature reflects broader developments in academic criticism in the same period. As I have implied, both the literary and the ideological criticisms of Blyton take an implicitly adult perspective: there is very little recognition here of the potential differences between adult and child readers, and no account whatsoever of actual children. In the more recent criticism, it’s possible to trace a rather belated discovery of the child reader, both in principle (Tucker, Hunt) and eventually in practice (both Ray and Rudd cite empirical research with children). Rudd quite correctly argues that we cannot make judgments about the effects of a text (or indeed its value) without taking account of the responses of its intended reader – although the difficulties of accessing children’s responses are somewhat more complex than he seems to assume.

Nevertheless, there are some broader reasons to be cautious about these claims. Blyton is far from unique among children’s writers in excluding or marginalizing adult characters. Her children may resent and seek to evade adult constraints, but they generally obey them: they are almost invariably polite, respectful and well-behaved. Furthermore, one might well argue that Blyton’s child-centered world is a kind of compensatory fantasy of empowerment: unable to exercise power in their own lives, children are spirited away to a world in which they enjoy absolute sovereignty. The stories present a kind of child-centred utopia from which children might potentially challenge the limitations of the real world; but they also provide a reassuring kind of flattery. In other words, they are little more than a form of escapism or wish-fulfillment.

Equally, I’m not sure that Blyton can be said to take the child’s point of view. While her writing may have a somewhat ‘limited’ vocabulary, it is not the writing of a child. Admittedly, she doesn’t try to appeal to adult readers with the kind of knowing irony that is apparent, for example, in Richmal Crompton’s William books (which I’ve considered elsewhere). However, she does frequently adopt an adult, almost schoolmistress-like tone. As we have seen, she often emphasizes the need to be generous and ‘nice’, rather than selfish or boastful. The common criticism of Blyton as condescending and moralistic would seem to contradict the claim that she is somehow ‘writing as a child’.

Ultimately, there is a risk that the ‘children’s rights’ approach might remove any grounds for critical judgment: if children like it, if it is popular, then it is automatically OK. Apart from anything else, this ignores the fact that books (or other media) for children are almost exclusively created by adults – and that what children ‘like’ may simply be a function of what is available (and indeed most intensively marketed) to them. There are bound to be limits as to how far adult authors and adult critics can speak for, or on behalf of, children – and the same applies even to adults who seek to defend children’s right to read whatever they like.