And so our story returns to the point at which it began. In this final section, I want to briefly revisit the Famous Five parody stories that have appeared in the last few years. These are by no means the first rewrites or continuations of Blyton books that have appeared over the years, but these are probably the first aimed at adults. As I’ve implied, these books are not so much parodies of Blyton’s originals; rather, they use the formula of the originals to satirize various aspects of modern life – albeit in a fairly mild and entertaining way.

The formula itself is certainly familiar. The characters have the same names, although they are no longer children but twenty-something Londoners; and their basic traits are fairly similar (Julian is the arrogant, wannabe leader, Anne is nice but bland, George is forceful and independent, and Dick is greedy and fairly stupid). The structure of the stories is also similar: the Five encounter a problem or puzzle, and through numerous implausible coincidences and discoveries manage to resolve it by the end. The Five are rather less competent, and the narratives rather more aimless than the originals, but perhaps the only significant addition to the formula is a character called Cousin Rupert, who appears in various guises (an estate agent, a management consultant, a public relations man) in different books. While the Five regard Rupert as loathsome and slimy, he is often (deliberately or not) a critical factor in them solving the problem and coming out on top.

The series is produced with the co-operation of the Enid Blyton Estate, and it is Blyton’s characteristic branded signature that appears on the front cover, while the author Bruno Vincent is only named in small type on the back. The books also contain some of the original illustrations by Eileen Soper, albeit with different (and not always relevant) captions. The Blyton Estate retains control: all titles have to be approved by its Trustees, and they will apparently not sanction any ‘inappropriate’ content that might damage the Blyton brand. The Five cannot be seen doing anything controversial or unduly ‘adult’, beyond drinking to excess. In these respects, the books are quite a long way from the much more acerbic approach of the Comic Strip films of the 1980s, although some of the latter’s influence lives on. The satire of modern life is also relatively bland: most of the targets are easy ones, although there are a few moments of slightly sharper parody – Julian’s role in Five on Brexit Island has strong echoes of Boris Johnson, for example.

In an interview in 2017, Bruno Vincent explained that he regards the series not as a rejection or parody of Blyton, but on the contrary as respectful, nostalgic and ‘unfashionably wholehearted’ – although clearly the Enid Blyton Estate would be unlikely to allow anything else (for example, he described how the Estate refused to give him permission to produce a Famous Five horror spoof). Vincent hopes, a little optimistically perhaps, that the books will be seen as ‘comic fiction for grown-ups’ rather than the more disposable Christmas stocking-fillers that are shelved in the ‘humour’ sections of bookstores.

Blyton herself would almost certainly have despised these latest versions of the Famous Five, although she would probably have admired the way they have exploited a market opportunity – and their speed and efficiency in doing so. Yet like the earlier takes on Blyton I have discussed in this essay, these books are also decidedly of their historical time. They might very loosely be described as postmodern: they are a kind of pastiche, perhaps more than a parody; they combine ‘classic’ and contemporary elements; and by portraying young adults in the guise of children, or in the form of a children’s book, they gently question notions of maturity. They might even be seen as a reflection on the precarious lives of modern twenty-somethings – the generation that has been variously described as ‘Millennials’, ‘Generation Y’ and ‘Generation Rent’. Yet they are also highly commercial, calculated products; and they are far from challenging or subversive. Ultimately, they speak of an age where it seemed that nothing was serious, and everything could be treated with knowing irony. 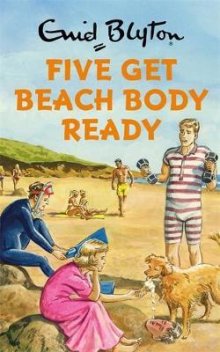 The various criticisms I have discussed in this essay appear at different times, and clearly derive from quite different perspectives. As such, they are bound to reflect different political, cultural and psychological assumptions, both about children and about children’s literature. However, they also overlap and inform each other in some interesting ways. As I have pointed out, the literary criticisms feed into the ideological ones that succeeded them; the ideological criticisms of Blyton’s ‘outdated’ prejudices are noted, but read in a different way, by the heritage approach; the heritage approach, with its nostalgic view of the ‘lost freedom’ of childhood also feeds into the more child-centred arguments of contemporary critics; and in some respects, all of them are present in more parodic or postmodern readings of Blyton, from the Comic Strip to Bruno Vincent.

Meanwhile, some of the same themes recur throughout these different perspectives, albeit in contradictory ways. To take just one example, let’s consider class. The literary criticisms clearly rest on a kind of unstated class bias; the ideological critics take Blyton to task for her own class prejudice, or at least those of her characters; while the various re-makes and rewritings either seek to efface class differences or to exaggerate them for the purposes of satire. So does Blyton merely reinforce class prejudice, or is it actually her critics who are doing this? Does she expose the ‘nastier traits of the children of the middle class’, or merely reinforce them?

Blyton famously said that she wasn’t interested in criticism from anybody over the age of twelve. She dismissed her critics as jealous and ill-informed – pointing out (not without some justification) that few of them had actually read her books. She liked to side with her child readers against what she saw as attacks on ‘their’ taste. And she tirelessly cultivated her readers – for example through clubs and readings – at times (it is suggested, for example in the BBC film) to the exclusion of her own children.

In my view, the mystery of Blyton’s popularity isn’t such a great mystery at all. She knew very well what her relatively inexperienced readers wanted: clear writing, without too many difficult words; fast-paced action, rather than tiresome description; clearly defined heroes and villains; adventures that invariably ended well; a degree of excitement, but not too much jeopardy or risk; simple humour and sincerity, rather than adult cleverness; lots of delicious food and cute, intelligent pets; and a degree of escapism rather than too much dreary realism. The enigma, I would suggest, is much more to do with adults’ confusion and ambivalence. Adults often have so much invested in children’s culture that it seems increasingly difficult for them to see it for what it is – and perhaps even to believe that something we can truly call children’s culture really exists at all.