Some critics have argued that the continuing success of the William books reflects a long-standing conservatism in English culture. This is partly a matter of how they deal with the theme of politics itself; but it is also to do with how they represent the social world, and how they respond to modernity.

As I have noted, Richmal Crompton was a High Anglican and a loyal Conservative, who campaigned for the party in local elections. Yet while politics do make occasional appearances in the William books, they are typically the focus for mild satire. Extremes on either side of the spectrum are gently mocked. In ‘The Weak Spot’ (1921), William’s older brother Robert briefly joins the Bolsheviks, although he quickly becomes disillusioned, not least when William attempts to redistribute his wealth, in the form of his bicycle and prize watch. ‘What’s in a Name?’ (1928) finds William witnessing a Moseleyite fascist demonstration, and going on to organize a group of ‘Greenshirts’ in a bid to become a Dictator – although here again, he ends up in failure. As we shall see, Crompton provides a similarly satirical treatment of the counter-cultural student protest movements of the 1960s.

‘William and the Nasties’ (1934) has attracted some criticism for its apparent anti-semitism, although this might be to mis-read Crompton’s intentions. As is so often the case in William stories, an initially unsympathetic adult, a tight-fisted Jewish sweetshop owner, is eventually transformed into the Outlaws’ benefactor, and they give up their campaign against him. Even so, the story has been deemed sufficiently sensitive that it has been omitted from subsequent editions.

As this implies, politics are often seen satirically, albeit from an implicitly conservative position. The efforts of reformers and campaigners of all persuasions are seen as foolish and futile: it’s best that things should remain as they are. In ‘William Enters Politics’ (1924) our hero ultimately withdraws from the political arena, unable to fathom the ‘confusions’ of both Conservatives and Liberals. However, in ‘William, Prime Minister’ (1929), William stands as a Conservative in a mock school election, and inevitably wins. Yet even here, the ultimate message appears to be somewhat sceptical. William’s friend Ginger offers the following summary of the political landscape:

Yet if Crompton largely steers clear of overt political messages, it could be argued that her representation of the social world is nevertheless highly conservative. Bill Schwarz, for example, asserts that the books portray ‘an idealised domestic world untroubled by the public events which all too readily gripped the minds of the English middle classes in the 1920s and 1930s’. Other critics, such as Ralph Stewart and Betty Greenway, argue that William’s pastoral world is ‘narrow, durable, and unchanging’ – one ‘where nature is essentially benign and authority is essentially benevolent’. In the 1960s, such criticisms apparently led to the books being banned by some librarians on the grounds of being ‘too middle-class’. According to a writer in the Times Higher, it was argued that ‘The majority of children… would not be able to identify with William’s world and, besides, the hierarchical nature of his society and the attitudes that went with it were out of step with modern democratic Britain.’

There is certainly some truth in this. Read today, the social world of the William books seems lost in time. This is a quintessentially English world of country cottages, rhododendron bushes, church fetes, sweet shops and genteel drawing rooms. Men like William’s father commute to vaguely defined jobs in the City, while mothers stay at home endlessly darning socks. There are some eccentricities here: as Mary Cadogan puts it, the village appears to be populated by ‘a bizarre assortment of earnest aesthetes, peppery ex-military gentlemen, nervous clerics, intense spinsters, batty artists and bright young things’. We see very little of the lower social orders, beyond the family’s domestic servants and gardeners.

To be sure, this world is gently satirized, but it is rarely threatened or seriously disrupted. The historian Ross McKibbin argues that Crompton was ‘an acute observer of the mood of the Southern middle class’, and some critics have even compared her satire of middle-class values to Jane Austen. Yet while William occasionally exposes adults’ hypocrisies and pretensions, the social order – and especially the class order – remains fundamentally stable. This is quiet satire, occasionally rising to the level of farce, in the manner of P.G. Wodehouse, rather than anything more challenging.

So are the William books simply conservative? Even at the time they were written, were they merely a kind of pastoral elegy for an imagined world? And when read and heard today, or seen on screen, are they any more than nostalgic escapism? 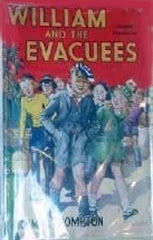 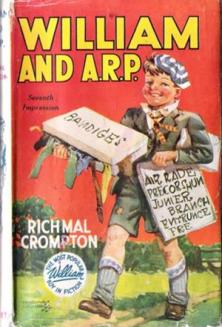 The answer, I would suggest, is a little more complex. In exploring these questions further, I particularly want to consider the claim made by the critic William Whyte that Crompton was a ‘conservative modernist’. According to Whyte, she was a conservative in the sense that she wished to defend the private, domestic world against the public world – and to defend the individual against society and the state. She had an abiding faith in the resilience and continuity of English middle-class values, combined with a certain conservative pessimism about human nature. Yet she was also a modernist in striving to be contemporary, and to keep pace with the times.

In fact, elements of the modern world do intrude on William’s pastoral scene throughout the series. Aside from the references to contemporary politics discussed above, the Second World War appears in collections such as William and the Air Raid Precautions (1939), William and the Evacuees (1940) and William Does his Bit (1941). As we shall see below, there are numerous examples of such contemporary references in the books published in the 1950s and 1960s. The world Crompton represents is by no means entirely unchanging, and she herself was explicitly concerned that her stories should be ‘topical’. Yet the question is whether such changes are any more than superficial, and whether she genuinely manages (or even tries) to come to terms with ‘modern democratic Britain’.