To explore this further, I want to look more closely at how the William stories evolved in the 1950s and 1960s. I begin with two collections that seem to reflect something of the changing context of early post-war Britain: William and the Moon Rocket (published in 1954) and William’s Television Show (1958). In many respects, the social world of these books remains unchanged from the pre-war William. Yet there are several stories in both collections that focus on more contemporary social developments.

In some instances, these elements are fairly incidental. In the title story of William and the Moon Rocket, William and his friend Ginger stow away in what they mistakenly imagine to be a moon rocket being transported to its launch base. Eventually they arrive at a fairground where it turns out that the ‘rocket’ is being used for one of the rides. However, in the process they manage to uncover a criminal scheme for hiding and selling off stolen goods. True to formula, William wins out in the end, and even manages to please his disapproving father, who is excited by the unexpected opportunity to attend the fair.

Likewise, in ‘William’s Television Show’, chaos ensues when William attempts to mount a television show for the local children in order to make a little money. The show, of course, is a live performance, although William assures his audience that this is much better than mere ‘pictures’. Events ascend to farce when the children, apparently copying a television programme in which buildings are demolished, take it upon themselves to lay waste to a local hen-house – although (as ever) everything turns out well, as they manage to rescue a hapless artist who has implausibly become trapped inside. At a stretch, this story might be read as a parody of contemporary arguments about the harmful effects of television – arguments that were a key point of reference for the Himmelweit Report, Television and the Child, published in the same year. However, in other cases, the stories can be read as rather more directly satirical.

‘William the New Elizabethan’ (1954) picks up on an idea that became briefly fashionable in the wake of the coronation of Queen Elizabeth II. Popularised in several books and magazines, the New Elizabethans looked back patriotically to the era of Elizabeth I and Shakespeare, when plucky little England was resisting foreign invaders; but they also looked forward to a modern world of industrial and commercial innovation. Rather like Tony Blair’s ‘Cool Britannia’, the idea combined elements of conservatism and nostalgia with a modernizing edge.

In the story, William is inspired by this patriotic mood, and decides that, like the sailors of Drake’s Armada, it is the Outlaws’ duty to steal from foreigners. In the event, none of the ‘foreigners’ the Outlaws locate in the village turn out to be foreigners after all, and none of them seems unduly worried by the Outlaws’ attempts to requisition their property. Eventually, while digging a hole through the earth in search of new countries to colonize, the boys come across some family silver that has been buried in a bombed-out and abandoned house. This turns out to belong to the town mayor, who congratulates them all. Here again, the formula remains intact: the boys’ ‘bad behaviour’ is far from dangerous or threatening, and adult authority proves to be benevolent in the end. Yet ‘William and the Elizabethans’ could easily be read – at least by adults – as a kind of grotesque parody of these fashionable ideas. 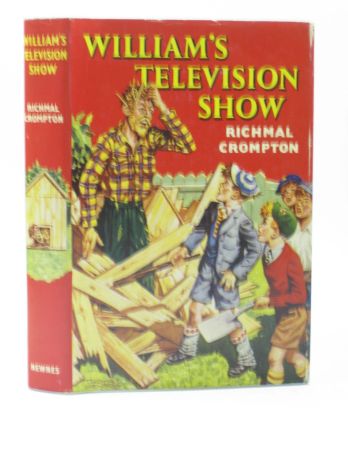 Such satire of modernity is apparent elsewhere in these books. In ‘William and the New Game’ (1954), chaos arises when a mother applies a new approach to child-rearing that she has learned from a child psychologist. At her daughter’s invitation, William and the Outlaws take possession of her house while she is out, and proceed to trash it while acting out an anarchic, violent parody of the British parliament – an idea encouraged by William’s mother. In ‘William and the National Health Service’ (1958), William stumbles into a local hospital and is inspired to set up a parallel version of the NHS for animals, to which the local children bring their assorted pets with mostly imaginary complaints. The plots of these stories are sometimes as chaotic as the events they depict – this is not ‘classic’ William – but the basic formula remains familiar. In each case, order is restored, William avoids punishment, and the adults concerned end up being delighted by the outcome.

Both books – along with others of this period, like William and the Space Animal (1956) – contain several attempts on Crompton’s part to remain ‘topical’, as she had repeatedly urged herself to be. Yet despite the elements of satire and parody, her response to contemporary developments remains essentially conservative: her satire is primarily directed at silly, new-fangled ideas, rather than anything more fundamental.

William and the counter culture

William and the Pop Singers, published in 1965, includes several stories that reflect Crompton’s response to the emerging counter-culture of the period. Once again, she was seeking to be ‘topical’, yet her stance is now even more irritably conservative. This is not Crompton at her best, and in many respects the formula seems stale and tired.

In the title story, the leader of a pop group called the Argonauts comes across William and the Outlaws performing a farcical science fiction drama on the village green (as ever, they are attempting to raise some money, after Douglas has broken his brother’s electric razor by using it to plane some wood). The young man, Chris, is clearly presented as rather pretentious: he talks about ‘art for art’s sake’ and bemoans the fact that ‘mechanisation has destroyed art’. Chris is seemingly inspired by the Outlaws’ play, and wanders off. When the other three Argonauts appear, looking for him, they explain the source of the dispute that has broken out between Chris and the rest of the group:

‘We must give him time to work it out of his system’ [said Johnny].

‘Work what out of his system?’ said Henry.

‘His education,’ said Johnny with a reverent hush in his voice. ‘He’s educated. It was him that made us call ourselves the Argonauts.’

‘Out of his education,’ said Pete.

‘He’s classy,’ said Johnny. ‘He’s had a classy education and taken classy exams and sometimes it comes over him that he’s wastin’ his life singin’ pop songs and – he’s got to work it out of his system.’

Chris eventually reappears, and sings a new song that he has just written. The group is reunited, and Douglas’s problem is quickly and implausibly solved when the members of the group find a spare electric razor.

The satire here is not exactly subtle – although again, it is interesting to consider how much of it might be aimed at adult readers, rather than accessible to children. Despite his grand pretentions, Chris is ultimately shown to be motivated not by artistic imperatives, but rather by fan mail; and the song that he eventually performs is clearly intended to be quite banal. And yet the other members of the group (which may or may not be modeled on the Beatles) defer to his ‘classy’ education, as though they would be incapable of achieving anything themselves. Youth culture is seen to be shallow, trivial and pretentious – in some ways reinforcing Chris’s own criticisms.

Crompton’s response to the cultural developments of the 1960s is readily apparent in other stories in the collection. In ‘William and the Holiday Task’, our hero is set homework for the summer holidays by a trendy teacher, Mr. Mostyn, ‘a flamboyant youth with a startling taste in socks and ties, whose “modern” methods of teaching left the minds of his pupils completely but not unpleasantly befogged.’ Mr. Mostyn is described as ‘so engrossed in acting the part of the unconventional schoolmaster to his own satisfaction that he required little or no support from the rest of the cast’. When William returns to school at the end of the story, we learn that his teacher has left the school to become an actor in ‘a small and exclusive repertory company that specialized in performing “experimental” drama to a limited audience of left-wing intellectuals.’ Here again, the satire seems to be directed more towards an adult reader; and this is reinforced by events in the same story, when the hapless artist Archie (sometime boyfriend of William’s sister) attends a class on ‘Neo-primitive art’ and achieves a surprising success in selling a painting.

In ‘William and the Protest Marchers’, a group of student protesters implausibly appears in the village having lost their way on a protest march to London. The students ‘straggle’ through the village, ‘a collection of youths and maidens, long-haired, tight-jeaned, wearing brightly coloured scarves and sweaters’; and they have names like Cedric, Constantia, Dolores and Ferdinand. Their leader, Cedric, is represented as self-important, fastidious and vain. Even worse, he has a luxuriant beard. The group are students of Newlick University, which Cedric pompously proclaims to be a ‘University of the Future’, unlike ‘those moth-eaten decayed relics of antiquity’, Oxford and Cambridge. However, the students are not protesting about political issues or world events, but about the university’s attempt to ban their mascot, Hannah the pig: according to Cedric, the students have ‘traditions to build up, principles of freedom to inaugurate and maintain’.

As I have said, this is not Crompton at her best, and yet it illustrates some of the wider limitations of her ‘conservative modernism’. Modern phenomena are introduced quite artificially into William’s world, in ways that strain plausibility: they are represented by outsiders to the village, who quickly disappear. William is aware of pop music and television, but these remain largely extraneous to his life. The satire reads like that of a fusty elderly person – an ‘old fogey’ – responding irritably to modern life, but with very little understanding or sympathy for young people. The modern world is undoubtedly recognized – this is not mere nostalgia for some imaginary golden age – but it is also very quickly dismissed. This is certainly conservative, but it is quite far from modernist.