As I’ve suggested, soul music fell somewhat out of favour among young white audiences in the south of England in the late 1960s. At least in the counter-culture of the time, the music was seen by many as too ‘commercial’, and hence as implicitly capitalistic. There were some soul dance nights in London in the early-to-mid 1970s, most notably at the 100 Club on Oxford Street – although significantly, they were often billed as ‘Northern Soul’. In his excellent history of popular music in the capital, Sounds Like London, Lloyd Bradley resurrects some largely forgotten British soul performers of the early 1970s, including Root and Jenny Jackson, FBI and Cymande; and he also gives a central place to Eddy Grant, the leader of The Equals (a multi-racial band that had its first hits in the late 1960s) and subsequently a producer and entrepreneur. However, it was not until the late seventies that a new soul scene began to appear in the south – and perhaps significantly, it was more in the suburbs and outer fringes of the city than in central London itself. 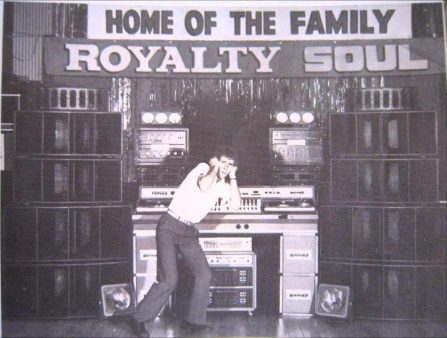 I say ‘perhaps’ because the significance of geography here is not entirely clear. As we’ve seen, the term ‘Northern Soul’ was actually a southern invention, a label created by a DJ and journalist based in London, Dave Godin. Some adherents of Northern Soul went on to claim that there was a kind of affinity between the industrial working class of smaller towns in the North of England and the black working class of major US cities like Detroit and Chicago, where their favoured music was largely created – although, for the reasons I’ve outlined, there are some grounds for questioning this. I’m using the invented label ‘southern soul’ (in scare quotes) here primarily to differentiate it from Northern Soul: it refers to a dance scene that was largely confined to the south-east of England, rather than to music produced in the southern states of the USA. As we’ll see, the social composition of ‘southern soul’ fans was rather different from their northern counterparts, although I don’t believe that is simply a matter of geography.

The earliest glimmerings of the southern scene can be detected in the mid-1970s, just as Northern Soul was hitting its peak. Progressive rock was starting to lose momentum, not least with the onslaught of punk; although reggae was also on the rise. The ‘southern soul’ scene catered for a different audience, for whom none of these alternatives held much appeal. Rather than rarities from the 1960s, the scene mainly focused on contemporary soul, much of it with jazz and funk influences: this was mostly dance music, although at slower tempos and with a less overt beat than the ‘stompers’ of Northern Soul. Some of this music merged into what came to be called ‘disco’ in the later 1970s, although it was more diverse and less obviously commercial. Like Northern Soul, the scene remained under the general public radar for some time. Its growth depended upon the development of an infrastructure (clubs, promoters, record shops, distributors), specialist media (magazines, radio) and entrepreneurs (DJs and record industry executives, who were often the same people). 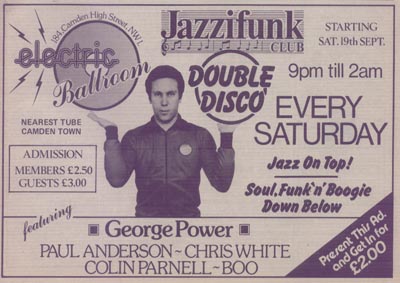 It’s hard to identify a single starting point, but in the mid-1970s, a network of soul music nights and clubs began to develop around London and the south east, particularly in Essex and Kent. Key venues, among others, were Tiffany’s in Purley, Flick’s in Dartford, the Lacy Lady in Ilford, the Royalty in Southgate, and the Goldmine in Canvey Island. While the Royalty and the Lacy Lady were located in London suburbs (and on the tube line), the others were all further out of town; and the Goldmine, probably the largest, was on an island in the Thames estuary, almost 40 miles from central London. Most of these venues were comparatively plush, up-market nightclubs, as distinct from the cavernous and rather shabby ballrooms of the northern scene. Flick’s, for example, featured a high-tech motorised lighting rig that would be lowered towards the dance floor at key moments. 1977 saw the first all-day dance marathon, at Reading, and Tiffany’s mounted a second the following year. In 1979, the first ‘National Soul Weekender’ was held at a holiday camp in the East Coast resort of Caister – an event that subsequently became the scene’s most important and lasting institution. Most of these clubs and events had a less exclusive music policy than was the case on the northern scene: older and contemporary soul would be played alongside jazz-funk, and even some lovers’ rock and reggae, as well as more mainstream disco hits.

As with Northern Soul, DJs were the key figures – in this case, both in clubs and on radio. In 1976, the host of a phone-in show on the BBC London local radio station named Robbie Vincent had persuaded his managers to let him present a two-hour weekly specialist contemporary soul show. Vincent was one of a group of DJs who became stars on the scene, and were affectionately known as the ‘soul mafia’: Chris Hill, Jeff Young, Greg Edwards and Froggy (Steve Howlett) among them. As was the case with Northern Soul, the venues also hosted live appearances, with visiting US artists appearing alongside home-grown British bands: Flicks, for example, featured favourites such as Maze, Odyssey and Patrice Rushen, among many others. Several of the DJs also worked in the Artists and Repertoire departments of record companies. Greg Edwards, for example, had come to the UK from America as an executive for the soul label Philadelphia International, and worked for CBS before moving on to host a weekly show on the BBC and then on Capital Radio, London’s main commercial station. Meanwhile, specialist record shops also appeared, mostly located closer to the centre of the city, such as Solar in Brixton, Contempo and Soul City in London’s West End, and Moondog in East Ham. Many records originally sold at inflated prices on import were eventually picked up for UK release – although, as with Northern Soul, there was considerable status attached to being ahead of the crowd. 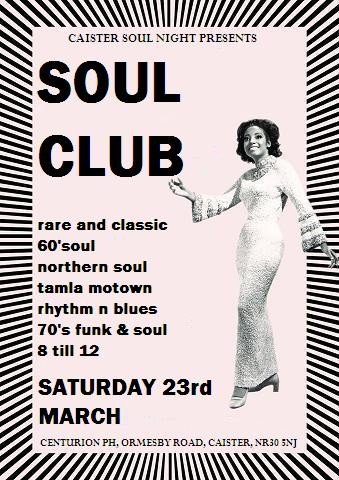 A TV documentary made in 1980 for the London Weekend Television show Twentieth Century Box gives a rare insight into the scene at the time, and makes an interesting comparison with Tony Palmer’s film on the Wigan Casino. The programme contains extensive footage of the Royalty in Southgate, showing the DJ Chris Hill characteristically whipping up the crowd. There are several similarities with Northern Soul. The fans are shown seeking out rare records from the US, and are clearly very knowledgeable about their favoured artists: they draw a clear distinction between rare soul and what they call ‘disco boom’ material that was becoming popular in the wider mass market. Like Northern Soul, this was clearly a mobile scene, with fans travelling from different parts of London and beyond: the programme introduces several self-defined ‘tribes’ (the Paddington Soul Patrol, the Brixton Front Line, the Funkmaster Generals from Ilford), some of whom wear what are effectively uniforms – although in general there is not a single preferred dress style. Once inside, the dancers behave almost like a football crowd, jumping up and down, waving banners, climbing on top of each other, and shouting out in response to the DJ. In a sequence at Caister, we see the fans in fancy dress, behaving with wild abandon as though at a carnival. There is little of the controlled expertise or individual competitiveness on display in films of Wigan Casino, although there is undoubted status attached to being a skilful dancer.

In interview, Chris Hill talks about the ‘religious fervour’ of the participants, and describes promoting soul music as a ‘crusade’; and, as with Northern Soul, participants often felt a powerful sense of dedication and commitment. In general, however, this is a scene that appears to take itself less seriously than is the case with Northern Soul. This is certainly evident at Caister, where the element of hedonism and carnival comes to the fore. From its beginnings in 1979, the event quickly became a biannual gathering. After a rocky period in the later 1980s and early 1990s, it was reborn in 1994, and has continued ever since, with many of the same DJs, no longer at Caister but at venues nearby. There are numerous amateur videos of the event online, as well as a BBC documentary dating from 1998. The atmosphere seems close to that of a Club 18-30 holiday, or perhaps a 28-50 one. Participants are shown, not just dancing, but also in the ‘tropical waterworld’ and the on-site restaurants, playing knockabout football and having loud chalet parties till dawn. Amphetamines are not notably in evidence, although alcohol certainly is – as (by implication) is a good deal of sexual action. Again, there are some striking contrasts here with Northern Soul (or at least with the ways that it is typically represented).

While the contemporary soul favoured on the southern scene was covered in specialist publications like Blues and Soul and Black Echoes, radio was a particularly important medium here. During the mid-1970s, in the days before disco, soul music was rarely played on BBC national radio – and Robbie Vincent was unusual in effectively being able to smuggle it on to a local BBC station. The advent of commercial radio had opened the window a little wider, with Greg Edwards’ show on Capital. But in the later 1970s and 1980s, illegal pirate radio was a crucial vehicle for this kind of music, as well as for other more ‘underground’ styles. The two longest running soul stations were Radio Jackie, which began broadcasting in 1969, and spun off into JFM in the early 1980s; and Radio Invicta (with its slogan ’Soul over London’), which ran from 1970 to 1984. Others that appeared in the early 1980s included Horizon, Solar and Kiss FM, which eventually became a leading legal station. Many of these stations also served as training grounds for DJs who would go on to enjoy much wider success.

Access to the airwaves was highly restricted at this time: most of these stations broadcast via aerials illicitly installed at the top of tower blocks, and often had to move at short notice in order to stay one step ahead of the Post Office investigators, who could raid them and confiscate their equipment at any time. While some of the stations broadcast live, others used pre-recorded tapes. The signal was often weak and intermittent, and there was little advertising revenue to be found. Nevertheless, as the 1980s proceeded, the pirates became more commercially-minded and more professional in their operations. Following the 1984 Telecommunications Act, the government finally proposed to expand access to the airwaves, and several stations closed in the hope of being granted official licences – although the process proved slower and more frustrating than had been promised. 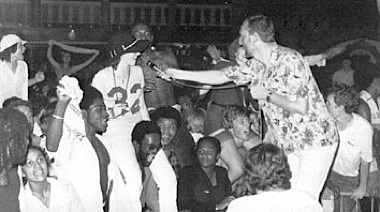 The club dance scene has obviously evolved in many ways since this time. The slump in fortunes of this ‘southern soul’ scene in the late 1980s was obviously partly to do with the rise of the rave scene. Younger DJs emerged, playing a wider mix of electronic dance music, including house and techno, from Europe as well as the USA; and by the late 1980s, the scene had begun to merge into the rave phenomenon. Some of the established DJs stuck with soul, as did their followers, and (as with Northern Soul), an element of revivalism began to appear. Four decades on, Caister and other similar events have continued, albeit with a somewhat older clientele and more luxurious facilities. There are numerous websites and curated playlists online, as well as a couple of online radio stations (‘Mi-Soul’ and ‘Soul Connexion’), countless compilation CDs, and a ‘Soul Survivors’ magazine; and, of course, there is a Caister Facebook group. Even so, the definition of the scene still appears less strict and ‘cultish’ than Northern Soul: there are a great many all-day or all-night revival events, looking back to various ‘golden ages’ of the 1980s, 1990s and beyond, but the boundaries here are quite blurred.