Despite the looming calamity of Brexit, the UK remains the fifth or sixth largest economy in the world. For seventy years, it has been an established welfare state, which claims to ensure a decent standard of living for even its most disadvantaged inhabitants. Yet child poverty has remained a stubborn fact of life in modern Britain.

Official government statistics claim that 2.3 million children are currently living in poverty in the UK, although other estimates are much higher. The Child Poverty Action Group puts the total at 3.7 million, seemingly based on the same government figures. Unicef’s figure is roughly the same; while the campaigning group End Child Poverty puts it at four million – that is, one in three UK children. 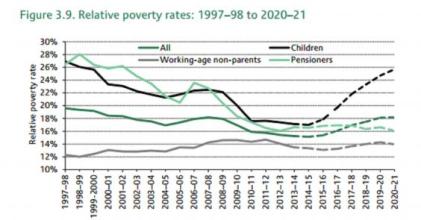 Of course, child poverty is not a new phenomenon. Throughout the nineteenth century, successive governments attempted to address the problem by implementing the Poor Law, which provided limited (albeit often punitive) state relief; while philanthropists set out to ‘rescue’ poor children from environmental degradation and parental depravity. Yet by the early years of the twentieth century, the persistence of child poverty was undeniable – and indeed well documented by social researchers such as Charles Booth and Seebohm Rowntree. Such accounts typically evoked fears about the dangers posed by large numbers of poor children – especially in cities – and sought to distinguish between the ‘deserving’ and ‘undeserving’ poor.

Following the establishment of the British welfare state, there were limited attempts to address the problem, although it was not until the 1960s and 1970s that real progress began to be made. However, the election of the Thatcher government in 1979 saw a complete reversal: the numbers of children living in poverty tripled over the 1980s. By the end of the 1990s, children in Britain were some of the poorest in Europe and the ‘developed’ world. Despite the New Labour government’s commitment to eradicate child poverty within twenty years, figures dropped only slightly during the 2000s, and have since levelled off.

Of course, distinctions should be made here between relative and absolute poverty. Poverty means something very different in an affluent country like the UK as compared with much poorer countries. Yet the UK regularly scores very highly on international comparisons of inequality, and the differential between the rich and the poor (known as the Gini coefficient) has continued to rise after taking massive upward leaps in the 1980s and 1990s. Predictably, child poverty is more prevalent among lone-parent families, among certain ethnic minorities, and where parents have disabilities; and while it is most obviously associated with unemployment (and under-employment), current figures are now showing a rise in child poverty in households with working parents too.

Despite the efforts of campaigners and social reformers, the experiences and perspectives of poor children have largely been ‘hidden from history’, and from contemporary public debate. Social class is an issue that the British people will talk about, directly and indirectly, all the time. Yet class is often considered primarily in cultural rather than material terms, as a matter of individual taste and morality, rather than poverty or deprivation. As critics like Owen Jones and Imogen Tyler have argued, there is a widespread form of ‘class disgust’ in the contemporary media, which focuses particularly on the figure of the ‘chav’. Yet ‘chavs’ are often represented as relatively affluent: they have money, but they spend it on the wrong things – on designer clothing, on drink and junk food – rather than on the consumer goods favoured by the refined middle classes. From this perspective, class is not a matter of inequality, but of lifestyle choice. 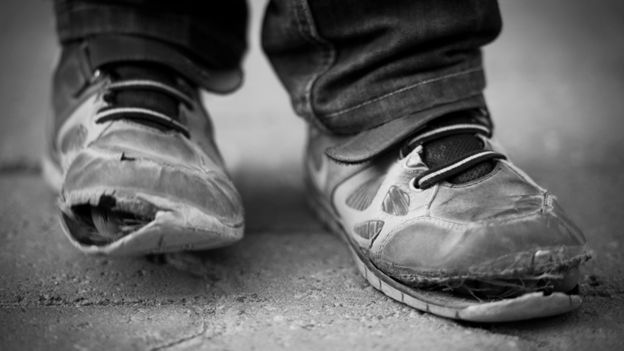 For all the invective directed against this apparently undeserving underclass, it is still rare to find media representations of real material poverty, and especially of child poverty. The three or four million children who live in poverty in the UK regularly go to bed hungry. They lack adequate clothing, and their homes are poorly maintained and heated. They cannot follow the same consumer fashions, or participate in the same leisure activities, as their peers. They do not go on holidays or school trips. They are more likely to be bullied, and to play truant or be excluded from school. The list goes on… yet these are lives we rarely witness on screen.

In this essay, I analyse and compare representations of child poverty in four British films, made across a period of almost six decades: Kes (dir. Ken Loach, 1969); Ratcatcher (Lynne Ramsay, 1999); Billy Elliot (Stephen Daldry, 2000); and The Selfish Giant (Clio Barnard, 2013). While these films are spread apart in time, two of them also address intervening decades: Ratcatcher is set in the mid-1970s, and Billy Elliot in the mid-1980s. All of them feature boys as central characters: I’ll be looking at girls, from a slightly older age group and with a rather different focus, in a later essay.

Despite their many differences, there are a great many echoes and similarities across these four films, which will emerge in more detail as I take each of them in turn. While they are by no means the only films of the period to portray the lives of poor or working-class children, each of them deals directly with material poverty as a central theme. They focus on the facts of poverty – for example, in terms of the daily struggle to find money to buy food or to keep warm, the lack of basic comfort and hygiene, and the constant threat of financial collapse. They also focus on what follows from that: the characters’ sense of exclusion from their peer groups and from institutions like schools, the loss of dignity and self-esteem, and the limited opportunities and horizons that are available to them. And in different ways, each of these films focuses on the possibility of an escape from poverty, however temporary or illusory it may be.

Of course, these films focus particularly on the worlds of children: to a greater or lesser extent, they purport to show the world through the eyes of the child. They show children doing ‘child-like’ things that are different from the things that adults generally do. They show how children are ignored, belittled and misunderstood by adults; and how, in turn, children often fail to understand aspects of the lives of adults. Each of them addresses the problem of ‘coming of age’, of transitioning towards (or at least coming to terms with) a different, ‘adult’ world. In representing childhood in particular ways, they also inevitably represent, define and construct adulthood as well.