Before concluding, I’d like to make a brief comparison between Teletubbies and two American shows from around the same period, Barney and Friends and Blue’s Clues. The differences between these three programmes throw into sharp relief some of the broader pedagogic assumptions I have been discussing.

Barney and Friends was first screened on PBS in the United States in 1992, and was quickly purchased by one of the largest commercial companies in the children’s sector, HIT Entertainment (now itself owned by the leading toy company Mattel). It has been shown in around fifteen countries worldwide, and ran for thirteen seasons until 2009: plans for further series have been mooted, although at present they appear to be on hold. Barney arrived at a point where the preschool market was significantly expanding, and it has generated a great deal of spin-off merchandising, as well as versions in other media formats such as DVDs and games.

The TV episodes of Barney and Friends take place in a studio set designed to resemble a school classroom. Unlike any of the other programmes I’ve considered (aside from Sesame Street), the show features a group of real children, who seem to be aged around seven or eight. Each episode typically begins when the children magically bring the ‘real’ Barney to life from a small plush toy. Barney is a large purple dinosaur (an adult in costume), who is assisted by a small cast of dinosaur friends, as well as occasional puppet characters. Each episode has a defined educational theme (for example, safety, the five senses, good manners), and Barney teaches the children various lessons, craft activities and songs in line with this. In addition to formal teaching, the programme makes extensive use of nursery rhymes, fairy tales, and traditional children’s songs. New lyrics conveying positive educational and pro-social messages are set to well-known melodies, and accompanied by carefully choreographed dance routines. The children deliver their scripted dialogue in highly artificial, stilted voices. In all these respects, the programme resembles a live theatrical stage show, with a cast of budding child stars. 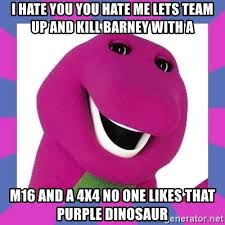 Barney and Friends has been massively popular with children, but it has also attracted what can only be described as virulent hatred on the part of adults. While this has died down in recent years, there are still several websites that circulate parodies and anti-Barney humour, some of which is blatantly violent, scatological and obscene. The Barney theme song (‘I love you, you love me…’) was reportedly used by American soldiers in the torture of Iraqi prisoners-of-war and by the interrogators at Guantanamo Bay. In some respects, Peppa Pig would seem to have inherited Barney’s mantle here, although in this case, the response seems easier to understand. The programme’s sentimentality and its moralistic messages are hard to take; and Barney himself is quite repulsive, as he giggles and gurgles his way with relentless enthusiasm from one activity to the next. The online ‘Jihad to Destroy Barney’, as one of the websites calls itself, makes perfect sense to me. And yet, like most of the other programmes I have discussed, Barney and Friends is clearly not aimed at adults: the thirty or forty million children who appear to have watched clips of the show on YouTube almost certainly take a different view.

Blue’s Clues, which began life a year ahead of Teletubbies in 1996, is different again. The programme is produced by Nickelodeon (owned by the giant media company Viacom), and screened on its dedicated channel for young children, Nick Jr. Six original seasons were created, through to the mid-2000s, and currently (as of 2018) there are plans for a reboot. The success of Blue’s Clues has come to rival that of Sesame Street: it has been screened in more than 120 countries, has won countless awards, and for many years was the highest-rated preschool show on US television. As with Sesame Street, a great deal of work has gone into creating a trusted educational brand; and there has been extensive formative research on the programme’s educational effectiveness. However, this is also a for-profit enterprise, and there is an extensive range of licensed merchandise and other media spin-offs, including computer games. 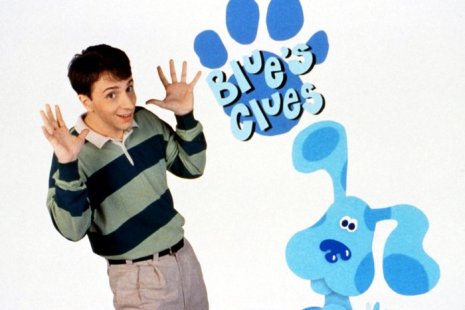 Blue’s Clues follows a very tightly structured format. Early in each episode, a puzzle or problem is presented to the presenter Steve (later succeeded by Joe). He has to search for treasure, or find out what Blue (his animated pet dog) would like to make, or buy, or do on a rainy day. Steve and Blue go off around the house in search of a solution, encountering various familiar animated characters (a set of condiments, a side-table drawer, a mailbox). He assembles three clues that are identified by blue paw-prints, noting them down in his notebook, and finally sits down in his ‘thinking chair’ in the living room to solve the puzzle. Along the way, he often encounters several smaller puzzles or tasks, which typically involve non-verbal reasoning processes such as sorting, sequencing, matching or counting. Occasionally, Steve or the animated characters will demonstrate a simple ‘make and do’ activity (craft, cooking or dressing up, for example), but it is the search for clues that drives the overall narrative. Steve frequently asks the audience for help, looking direct to camera (‘where’s Blue? Can you see her?’): after a pause for the viewer, a chorus of off-screen children generally responds – and, on occasion, they also point out clues that Steve seems to have missed.

There is a considerable amount of repetition, both within the episodes, and between them. The overall narrative structure, the domestic setting, the props and characters, the music and the familiar verbal catch-phrases (like Steve’s ‘handy-dandy notebook’) never vary from one episode to the next. Each episode is also repeated five times, Monday through Friday, allowing children the opportunity to predict the solution to the puzzle – and thus, according to the series’ producers, to gain a sense of ‘self-esteem’. Viewers are congratulated on how ‘smart’ they are for ‘figuring out Blue’s clues’.

In terms of its ‘media language’, Blue’s Clues is very straightforward and self-explanatory. Although Steve is in three dimensions, the set is two-dimensional, and the props and objects are created from paper and other materials, which are animated by simple computer programs. Shot transitions are clearly signalled (‘let’s go and look in the kitchen!’), and sound effects associated with particular objects or characters are familiar and predictable. Only once in each episode do we leave the studio, when Steve receives a message in his mailbox from some real-life children who are shown in a very short documentary sequence. When Steve encounters a new problem, and when he puts together the clues at the end of the show, various alternative options are presented in floating bubbles above his head. In many respects, the visual style is that of a simple 2D computer game, or an early ‘edutainment’ CD-Rom like Arthur’s Teacher Trouble (one of the first ‘living books’ for young children, released in 1992). The programme is very explicitly designed to focus and direct the viewer’s attention, and to invite specific responses at particular points. While Steve occasionally adopts an ironic, knowing expression, there are hardly any jokes or cultural references here that children would be unlikely to understand.

In all these respects, the comparison with Sesame Street is striking. Unlike the diverse, fragmented magazine format of Sesame Street, Blue’s Clues has a strong and consistent narrative structure, in which the same elements always recur. The events are predictable and everything is clearly explained: even the animated props are called by their literal names, and not by nicknames (‘mailbox’, ‘side-table drawer’, ‘bowl and spatula’). The pace is slow, and viewers are given a considerable amount of time to think things through in silence before they respond to Steve’s questions. Although its focus is on problem-solving rather than drilling letters and numbers, the approach is equally didactic. Yet unlike Sesame Street, it makes few concessions to any potential adult viewer, and few demands on children’s ‘media literacy’ – and in this respect at least, it almost seems like a modernized version of Watch with Mother. 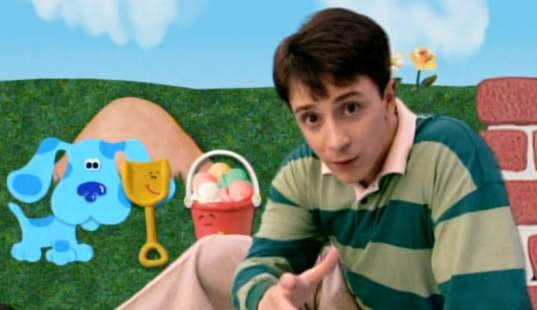 On the other hand, if we compare Blue’s Clues with Teletubbies, there are some striking differences. While the slow pace, the familiarity of the setting and the use of repetition are similar, the content and format of Teletubbies is much more diverse and unpredictable. It is also much more playful, and less driven by clear educational imperatives: it focuses much more on emotional and sensory experiences, and less on cognitive reasoning. Through its documentary sequences, Teletubbies also gives much more space to real children, and indeed to elements of the real world beyond the home. While Steve is far from authoritarian, and his successor Joe is even more child-like, they are nevertheless dominant adult figures, who often seem to be inviting viewers to guess the correct answers (which they already know). They have no real equivalent in Teletubbies, beyond the fairly minimal voice-over narration. Pedagogically, Teletubbies seems significantly more child-centred.