The wave of concern that was both reflected and constructed in the JD films of the 1950s was by no means a new phenomenon. As historians like Geoffrey Pearson and John Springhall have shown, there is a long history of anxiety about youthful misbehaviour, dating back many centuries. Perhaps inevitably, young people often serve as a focus for a whole range of hopes and fears about the future. The idea that the younger generation is out of control is often taken as evidence for much broader claims about cultural or moral decline. The early twentieth century psychologists who defined – and effectively invented – ‘adolescence’ as a unique life-stage clearly saw it as a period of fragility, vulnerability and risk. With the advent of modernity, young people increasingly came to be seen as both troubled and troubling.

Yet what remains striking – and in need of explanation – is that these waves of concern often seem to bear little relationship to the actual incidence of youth crime. Indeed, as criminologists like John Muncie suggest, the ‘facts’ on youth crime are almost impossible to establish, because the evidence is so unreliable. Official crime statistics – as well as other data such as victim surveys and self-report studies – vary significantly depending upon which kinds of behaviour are perceived as crimes, which measures are used (for example, whether crimes are reported, or recorded, or result in arrests and convictions), as well as how these figures are interpreted.

For contemporary criminologists, the issue here is more to do with labeling – that is, how it is that some kinds of behaviour are defined as ‘delinquent’ in the first place. In the case of youth, there is a particular issue of status offences: that is, types of behaviour that are defined as problematic when committed by young people, yet are not seen in this way when adults commit them. There is a history of such youth-related crimes – often of a very minor kind – being ‘legislated into existence’ in this way. In other words, public debate, and then the legal system, effectively criminalises particular kinds of youth behaviour. Furthermore, as Muncie argues, it was the creation of alternative sentencing and punishment regimes for juveniles – such as reform schools – that enabled ‘juvenile delinquency’ to be identified as a distinctive social problem requiring particular solutions. As is often the case, this construction of the ‘youth problem’ may tell us much more about adults than it does about young people themselves.

Although there is a long history of young people committing crimes, the label ‘juvenile delinquent’ only really entered into public debate in the post-war period, when it came to be defined as a specific, and somewhat new, social problem. Nevertheless, public anxiety about the problem of delinquency was oddly out of step with the apparent incidence of youth crime. As the historian James Gilbert has shown, there were waves of concern immediately after the war, and then again in the mid-1950s (1953-58). Public debate on the issue eventually faded away in the late 1950s, although statistics (however unreliable) do not suggest that youth crime had fallen at this time: in effect, what had disappeared or at least declined was the particular way of formulating the ‘problem’ – or in other words, the label of ‘juvenile delinquency’.

As Gilbert argues, there were some underlying social changes in the period, for which ‘juvenile delinquency’ became a kind of surrogate, or shorthand. Changes in family life during the war – men fighting and women working – led to concerns about a breakdown in family communication and socialization. As in the conclusion of Altman’s Delinquents, many commentators were reasserting traditional notions of family and community as a means of preventing impending social collapse. Meanwhile, the 1950s was a period of increasing affluence, and greater youth autonomy: the social and generational changes that eventually erupted in the 1960s were already beginning to appear. In this context, ‘delinquency’ became a coded term for much broader shifts in young people’s behaviour. As Gilbert explains, part of the concern here was provoked by the gradual integration of distinct racial groups (the black rhythm and blues group in the preface to Altman’s film is also not coincidental); and to some extent by fears about middle-class white Americans being somehow corrupted by their increasing access to ‘lower-class’ fashions and styles of behaviour, not least through the institution of the high school. Such changes, would, it was feared, turn young people into premature adults.

The uneven response to juvenile delinquency may simply have reflected that fact that public opinion was slow to catch up with these changes. However, Gilbert also points to the role of the numerous intermediaries and commentators who took it upon themselves to define and explain the phenomenon: journalists, campaigners and lobby groups, ambitious politicians, philanthropic foundations, academics, social workers and law enforcement agencies all had different motivations for talking up the problem of juvenile delinquency.

Numerous explanations of the apparent epidemic of delinquency were proffered at the time, not least by academics; and these different ways of framing the ‘problem’ also inevitably implied particular solutions to it. Where sociologists tended to emphasise the breakdown of mechanisms of social control (especially among immigrant groups), or the role of social class and poverty, psychologists were more inclined to consider the precarious nature of the modern family, or the difficulties of social adjustment during adolescence. However, as the debate evolved, much of the concern came to focus specifically on the influence of the media and mass culture.

Delinquency and the movies

The psychologist Frederic Wertham’s enormously influential book The Seduction of the Innocent, published in 1954, drew attention to the effects of comic books, and especially so-called ‘horror comics’, on young pepole’s behaviour. It led to public campaigns in which children were encouraged to incinerate their comic book collections, as well as to new regulatory codes within the industry (all documented in detail by the historian David Hajdu). Meanwhile, the ambitious senator Estes Kefauver initiated and subsequently led a Senate Subcommittee to Investigate Juvenile Delinquency, whose hearings lasted for several years between 1953 and the end of the decade (although it continued for many years thereafter). Here again, comic books came under scrutiny, but the movies were also an increasing focus of concern. 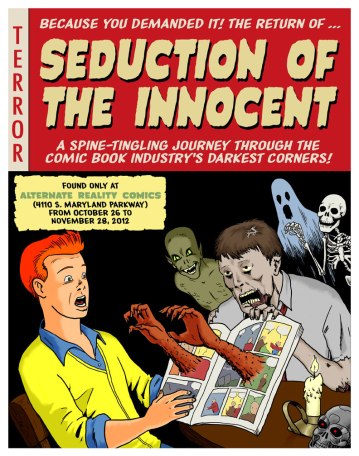 The movie industry sought responded to these concerns in several ways. Its formal submissions to Kefauver’s Senate investigations were keen to play down the influence of movies – and in this respect, it was supported by many academics, as well as professional experts such as social workers. Like many participants in these debates, Kefauver was wary of the charge of censorship, during a period in which the power of Joseph McCarthy’s House Un-American Activities Committee was starting to wane.

However, the industry was quite ready to censor itself, or at least to strengthen its regulatory codes. All the Hollywood films I consider below – as well as a great many others – were subject to detailed scrutiny by the industry’s Production Code Administration. As Jerold Simmons has shown, the original script for The Wild One was rejected on the grounds that it might encourage gang violence. The dialogue was eventually adapted to reduce the explicit violence, and to strengthen the pro-social message by playing up the redemption of the central character. Likewise, the script of Blackboard Jungle was adapted to reduce elements of sex, violence and profanity, although this did not enable it to escape criticism (and bans in some cities) once it was released. Other strategies of this kind included the provision of extensive ‘health warnings’ in the opening titles, although these were rarely as elaborate as those in Altman’s The Delinquents. In other instances, the ‘voices of authority’ within the film – such as the sheriff in The Wild One – were strengthened; and moral ambiguity or complexity was eliminated. Even so, voices within and beyond the industry were not altogether convinced of the effectiveness of such strategies: concerns continued to be expressed about the dangers of young viewers ‘identifying’ with the delinquent characters, however painful their ultimate come-uppance, or however convincing their ultimate redemption might have appeared.

At the same time, the industry faced a more fundamental dilemma. Prior to the 1950s, the cinema had been a genuine mass medium: movie-going was typically an intergenerational experience, with whole families attending together. As the decade progressed, this began to unravel. The advent of television was part of the explanation, obviously; but there were also changes in film production and exhibition (the break-up of the studio system, and legislation that made it impossible for studios to retain control of local cinema distribution). The industry gradually came to realize that it was targeting an older audience that was no longer going to the movies very much; and it began, albeit belatedly and uncertainly, to focus on the increasingly lucrative audience of teenagers and younger adults.

By the late 1950s, Time magazine was estimating that US teenagers had a combined spending power of 10 billion dollars, of which 16% was spent on ‘entertainment’. This duly led to what the film scholar Thomas Doherty calls the ‘juvenilization’ of American movies: the targeting of young people via movies and stars designed specifically to appeal to them. It also led to changes in film exhibition: teenagers were keen on drive-in movies, and on double-bills where they could spend a longer time socializing (or necking).

The JD movies were one consequence of this – even if (as we shall see) elements of them still appear to be implicitly targeted towards an older adult audience. Selling representations of juvenile delinquency as a form of entertainment might well have offered a vicarious (and perhaps quite superficial) sensation of power for younger viewers, who experienced relatively little power in their own everyday lives. However, they posed a dilemma for the industry. On the one hand, it was keen to target the teen audience, not least by promising apparently salacious content; yet on the other, it needed to convince adult authority figures of its own moral legitimacy. Anxieties about juvenile delinquency made for good box office, but they also increased the visibility of those who criticized the industry for its irresponsibility. Placing overt moral messages alongside sensational portrayals of deviancy was thus a risky strategy, but an economically profitable one.

As we shall see, much of this debate (and of course the movies themselves) spread across to the UK. The industry’s dilemmas here were also quite similar – although they arguably took longer to become apparent. Britain experienced its own home-grown moral panic about the effects of comic books, as Martin Barker has documented, although there was rather less concern about the harmful influence of the cinema. Nevertheless, the release of Blackboard Jungle in 1956 was apparently greeted with ‘riots’ in some UK cinemas, and (astonishingly) The Wild One was banned by the British Board of Film Censors until 1967. Meanwhile, the affluent teenager took a little longer to appear on this side of the Atlantic, only becoming apparent to researchers and social commentators towards the end of the decade. Perhaps for some of these reasons, the British film industry’s response to the ‘problem’ of juvenile delinquency was generally rather more restrained, and perhaps even sedate; although it was by no means less contradictory.