This ‘insider’ position is clearly apparent if we explore how This is England represents social class. Meadows’ portrayal of the working class is finely observed and by no means monolithic. It is particularly sensitive to the gradations and tensions within the working class. Thus, despite the loss of his father, Shaun’s family represents a kind of struggle for respectability: he is the only character who seems to be achieving upward mobility, through going to college and taking up with a succession of notably middle-class girlfriends. By contrast, Woody effectively rejects this when it is offered to him: his parents have already achieved a level of lower-middle-class status, but this is precisely the fate that he refuses. Lol’s parents, meanwhile, are much more of the ‘disreputable’ working class. There are important differences here that are apparent not just from developments in the narrative, but also in the mise-en-scene – the décor of the houses, the locations and the costumes.

In the TV series, there are numerous scenes where class differences are made manifest in the form of social comedy. In series two, for example, Shaun goes to visit his girlfriend at her detached suburban house, and meets her excruciatingly middle-class father, who tutors him on how to eat olives; while in series three, Lol’s mother gets involved in a violent argument with Woody’s parents over the location and design of their wedding. Woody’s discomfort with his boss culminates in a scene where (in a foursome, together with his new, more middle-class girlfriend), they have a Christmas meal at a relatively upmarket restaurant. These scenes are partly played for laughs, although they are also embarrassing and painful, much in the manner of Mike Leigh. Broadly speaking, the middle classes are seen here from the perspective of the working class; and upward mobility is by no means regarded as something to be envied, or even aspired to.

It’s interesting to compare this with the films about working-class childhoods (such as Loach’s Kes and Stephen Daldry’s Billy Elliot) that I discussed in a previous essay. There is little sense here of anybody needing or wanting to escape from poverty. Even Shaun’s moves into drama and then photography are seen with considerable ambivalence, not least by Shaun himself. He is very uncomfortable in his performance in a Christmas drama production – notably playing the part of a newly-wealthy but uncouth Yorkshire lad – although he is not helped in this respect by a mocking chorus of his old friends in the back row. His move into photography in series three is rather less awkward, and less satirically presented, but it is not addressed in any detail. As I’ve noted, Woody positively refuses his boss’s overtures to join the management; and by series three, Lol is working in a classically working-class capacity as a school dinner lady (albeit as the manager of her team).

Meanwhile, the landscape here is consistently grim: there is very little of the pastoral countryside found in the moments of escape in Kes or even Lynne Ramsay’s Ratcatcher. Most of the action takes place on public housing estates, where many of the flats and houses are boarded up and abandoned, the shops are struggling, and cars are few and far between. Public facilities (hospitals, clinics, registry offices, job centres) are typically run down. Yet the characters accept this as home, and don’t want to get out: when Woody’s parents offer to pay for a wedding reception in a posh country house, Lol firmly tells them that they will be more comfortable at the local working men’s club. Even when, in season three, several of the group drive off into the country in search of a rave party (and eventually end up at a hippy festival), they quickly return.

To some extent, Meadows’ films might be seen to represent the erosion – or even destruction – of traditional working-class communities. This is certainly a theme in his other work, perhaps most explicitly in Twenty Four Seven. However, in This is England, the situation is rather different. As I have suggested, the skinhead gang of the film – and the looser friendship group that it gradually becomes – represents a kind of community in its own right. The series regularly feature celebratory sequences in which most or all of the group come together; and there is an ethic of care, of looking out for your mates, that is repeatedly invoked. In different ways, the narratives of each of the television series involve the gang/group being split apart and then reconstituted; and this sense of community (and indeed family) is also something that is cultivated in Meadows’ way of working with his ensemble cast. Material circumstances may be difficult, but the sense of community here has by no means disappeared, despite unemployment, poverty and the wider sense of social decline. 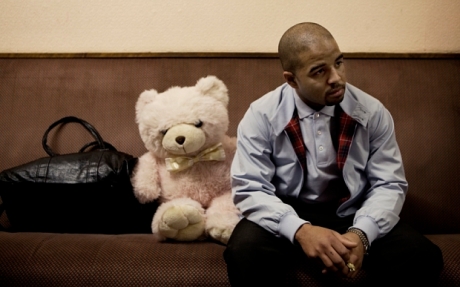 Some critics have suggested that Meadows’ work reflects the ‘crisis’ in working-class masculinity resulting from the collapse of traditional manufacturing industry. In many of his other films, fathers are variously either absent, ineffectual, or violent and abusive; and there are instances of these in This is England as well. However, I would argue that his images of working-class masculinity are more diverse and ambivalent than some critics have suggested. Shaun’s absent father, his replacement by Combo, as well as Lol and Kelly’s abusive father Mick, would clearly fit with this analysis; but we also see both Woody and Milky become more effective fathers – even if this isn’t romanticized, any more than motherhood is. Some of Meadows’ films (most notably Dead Man’s Shoes and Twenty Four Seven) represent an almost entirely masculine world, in which women are either marginalised or abused; although this is not in any sense celebrated. Yet in This is England, it is the female characters – especially Lol – who come to occupy the leading roles. If anything, Meadows is offering a critique of traditional notions of fatherhood and masculinity: he is certainly not arguing for the re-assertion of traditional patriarchal authority.

It could be argued that the television series of This is England are less overtly political than the film. As a viewer, I found this quite disconcerting to begin with. The ’86 series opens with scenes that come close to situation comedy, and the balance between comedy and pathos can initially feel quite uncomfortable. There is a kind of political wish-fulfillment about the film that is missing in the television series. To some extent, the series replaces class politics with gender politics, through its range of stories about domestic violence, abuse and single parenthood; although there’s little indication of any explicit political argument here.

However, I would argue that the series moves beyond any overt or schematic politics, and towards a representation of more universal human themes. As the narrative unfolds, This is England increasingly addresses much broader, even more timeless themes, of friendship, loss, abandonment and forgiveness – and, above all, of the passing of time itself. In doing so, it is profoundly emotional to watch, and sometimes painfully so. This is partly to do with the cinematography (the ‘poetic’ elements described above), but it is also about the quality of the acting: Stephen Graham as Combo, and especially Vicky McClure as Lol, provide performances that are often understated, yet exceptionally powerful. (And as the critic Beth Johnson suggests, McClure also bears considerable responsibility for developing her character’s storyline, not only for acting the role.) It may well be that in this respect, the series’ historical location becomes less significant. The narrative still very clearly evokes a particular time and place, but it could almost be happening anywhere, at any time.

Nevertheless, this is not to imply that the series is somehow ‘apolitical’, or that it abandons politics for some much more diffuse form of ‘human drama’. On the contrary, This is England is political precisely in that it represents ordinary working-class people as having complex emotional lives, which can be the stuff of serious drama, and indeed of tragedy. These are people with emotions and struggles like anyone else. They may be poor, but we are not invited to feel sorry for them on the grounds that they don’t have the things that the rest of us might enjoy. The emotion we feel is not from outside, let alone that of a middle-class do-gooder. In my view, this takes us a long way beyond the one-dimensional and contemptuous ways in which working-class people are often represented – and indeed, beyond the patronizing view of them as merely objects of pity.

Almost any representation that looks back to the past, and does so specifically through the lens of childhood, runs the risk of nostalgia. As Andy Pope points out, This is England was one of numerous British films released during this period (2005-2010) that looked back specifically to boyhoods in the 1980s. However, I believe that he is largely unfair to accuse Meadows’ film of nostalgia – and this is certainly not a charge that can be extended to the television series. There are undoubtedly elements of rose-tinted nostalgia in the early, autobiographical scenes of Shaun’s induction into the gang; but for the most part This is England cannot be accused of idealising or romanticizing the past, let alone yearning to return to it. It certainly represents nostalgia on the part of some of the characters – or at least their desire to recapture the original closeness of the gang – but it also exposes the limitations of this.

There’s a complex debate to be had about nostalgia, which I intend to take up in a later essay in this series. However, it’s important to note here that nostalgia is not inherently conservative, let alone reactionary, in any case. Nostalgia can provide an important basis for a critique of the present, and it can reflect a wide variety of personal needs and political values. We can yearn for some the things we remember in the past, without necessarily being under any illusion that they would be achievable or even desirable in the present.

The opposite accusation, however, would be to regard This is England as a kind of ‘misery memoir’ – which is to say, a relentlessly bleak representation of childhood (and particularly of working-class childhood) as suffused with pain and suffering. As Graham Fuller argues, ‘miserabilism’ of this kind became an equally popular characteristic of British film (and other media) across exactly the same period that Pope considers. Again, however, I do not believe that it is fair to accuse This is England of this kind of self-indulgent depression. Some of the scenes – the violent beating of Milky, the rape of Trev and Lol, the pumping of Lol’s stomach – are certainly harrowing to watch; and episodes frequently end on a note of melancholy, with shots of characters who are variously bereft or traumatized, accompanied by Einaudi’s atmospheric mood music. But This is England also contains scenes of great comedy (albeit often of a squirm-inducing kind), and even farce; and there are a great many celebratory sequences as well. To align it with ‘Misery Cinema’, in Fuller’s term, is to ignore that it is much more than this.

Representations of past childhoods may never be entirely exempt from either of these two criticisms – even though they seem to pull in quite different directions. Yet This is England largely seems to me to escape both of them: it offers a rich, multi-dimensional narrative of growing up in Thatcher’s Britain that takes us beyond the reassurance both of sentimentality and of political oversimplification.