George Lucas’s 1973 film American Graffiti is routinely described as ‘nostalgic’ – and indeed as the film that originated a Hollywood cycle of ‘youth nostalgia’ movies that followed it. In fact, the film was preceded by two other examples of the genre, Robert Mulligan’s Summer of ’42 and Peter Bogdanovich’s The Last Picture Show (both released in 1971) – although both were set in earlier decades. Lucas’s film is nominally set in 1962, although most of its cultural references are drawn from the 1950s: in a sense, it takes place before the changes of the sixties began. Its massive commercial success (worldwide earnings to date are in excess of $140 million) led to a whole series of retrospective film dramas and musicals set in the same period, including Lords of Flatbush (1974), Cooley High (1975), Grease (1978), The Wanderers (1979) and Rumble Fish (1983), as well as the long-running TV series Happy Days (1974-84) and its various spinoffs. 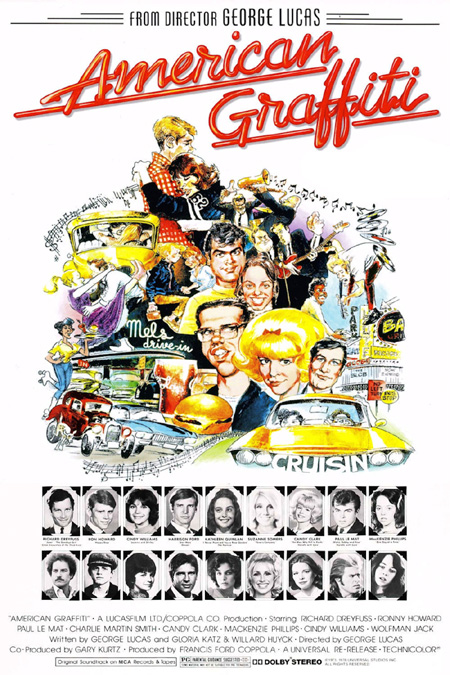 Set in the small town of Modesto, California, American Graffiti follows the interwoven narratives of four male characters on the night of their final high school graduation party, before two of them are due to leave town to go to college. All four are ‘types’, and their respective positions are clearly announced by the form of transportation in which they arrive on the opening set, the parking lot of a diner. Steve drives a ’58 Chevrolet Impala, a cool but relatively conventional 1950s automobile; Curt arrives in a somewhat battered Citroen 2CV; Terry (or Toad) rides up on a Vespa-style motor-scooter, which he crashes ineptly into a wall; while John Milner appears revving a ’32 Deuce Coupe, customized for racing. As the characters proceed to cruise from place to place around town, Steve breaks up and then reunites with his long-term girlfriend Laurie; Curt pursues an older blonde woman – a ‘goddess’ – whom he spots driving a white T-Bird, but then becomes caught up with a gang of hoodlums; Toad is allowed to borrow Steve’s car, and uses it to pick up a girl, Debbie, with whom he tries and fails to make out; while Milner is lumbered with a feisty younger girl, Carol, and is eventually challenged to a road race, which he wins.

On one level, then, American Graffiti is about cars and heterosexual romance, and the relations between them; but it is also explicitly preoccupied with the continuity between the present and the past, and with the passing of time. These concerns are announced in its opening few minutes. The characters are all looking back or looking forward, looking to stay where they are or to move on. The key dilemmas for Curt and Steve are to do with their imminent departure to college. Curt, the more academic type, is getting cold feet, while Steve is ready to abandon Laurie and head off. Steve tells Curt, ‘we’re finally getting out of this turkey town’, and urges him to put his doubts aside: ‘you can’t stay seventeen for ever’. Yet by the end of the film, their positions are schematically reversed: it is Curt who leaves, while Steve stays in town with Laurie. High school graduation thus represents the end of childhood: there are repeated references in these opening few minutes to the fact that the characters are ‘not kids any more’, and that they should no longer be interested in ‘juvenile’ things. 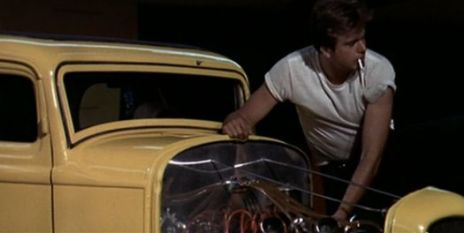 And yet retrospection is a central preoccupation for all of them. Milner, older than the others, is the character who has stayed behind, working as a car mechanic: he talks about ‘remembering the good times’, and looks back nostalgically to what the town used to be like ‘five years ago’. According to him, ‘rock-and-roll has been going downhill since Buddy Holly died’. Although he wins the road race, he knows (despite Toad’s attempts to reassure him) that his days as the coolest guy in town are numbered. Meanwhile, Laurie constantly reminds Steve of the details of their early romance, most of which he seems to have forgotten – effectively tying their past to what she intends will be their future together. As she tells him, ‘it doesn’t make sense to leave a home to find a home’. Curt is perhaps most obviously troubled by this tension between past and future. He wanders the school corridors, trying and failing to get access to his old locker; he has an intimate chat with one of his teachers, who went off to college and quickly came back (‘Maybe I was just scared’, he says); and he briefly takes up with a former girlfriend, recalling the good times. Yet he also has political ambitions (he wants to

become a presidential aide, or at least shake hands with Kennedy), and he continues to pursue his fantasy woman, seeing her car from above in the closing shots as his plane takes him off to college. When Curt meets the Wolfman – the enigmatic radio DJ whose music and patter effectively stitch the narratives together – he is told that ‘there’s a great big beautiful world out there’, and urged to go out and find it.

Ultimately, then, the film’s central enigma is to do with the relation between past and future – between who we have been and who we will become. As such, the audience has to be told how things turned out, and this is something the film delivers before its closing credits. Steve, who chose to stay, ends up as an insurance agent in Modesto; Toad is missing in action in Vietnam; Milner is killed by a drunk driver in a road accident; while Curt is a writer in Canada, presumably dodging the draft. In each case, the characters receive a kind of poetic justice: Curt escapes, not just Modesto but the United States, while Steve accepts a conventional suburban life; and Toad and Milner are both effectively denied a future. In line with the film’s almost schematic approach, each of these outcomes seems to confirm a judgment on the characters’ different positions between past and future. 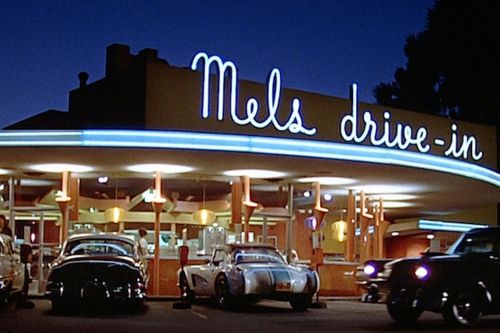 American Graffiti was famously cited by the theorist Frederic Jameson in his discussion of postmodernism, briefly mentioned above. For Jameson, the film is a primary example of the ‘historical amnesia’ and ‘depthlessness’ of contemporary US culture – ‘a society that has become incapable of dealing with time and history’, for which ‘the past is forever out of reach’. American Graffiti is, he argues, essentially a pastiche of the past, achieved through combining the characteristic artworks and objects of the time: it is a representation composed merely of other representations. Like many other discussions of postmodernism, Jameson’s sweeping account raises much broader historical and epistemological questions: aside from anything else, it seems to assume that we could gain some kind of authentic, unmediated access to the past, outside of representations.

Even so, Jameson’s observations about pastiche do carry some weight. The film is full of iconic period imagery – the streamlined automobiles, the drive-in diner with its neon signs, the girls’ flared dresses at the high-school hop. It relies heavily on classic rock-and-roll music, not just to create period atmosphere but also to comment upon and connect the different elements of the narrative (it notably begins with Bill Haley’s ‘Rock Around the Clock’, the tune that also opened one of the original juvenile delinquent films, Blackboard Jungle, in 1955). Most of the characters and set pieces seem extremely familiar – the under-age kid attempting to buy liquor, the middle-class guy being inducted into the delinquent gang, the booby trapping of the police car. Yet while American Graffiti may have an air of pastiche, it is also the original source of a great many elements that were subsequently pastiched (or at least reworked) in the films that followed it. It’s hard to view it today without this element of hindsight (and this may have been the case for Jameson, whose article was based on a talk that was first given almost ten years after the film’s release). 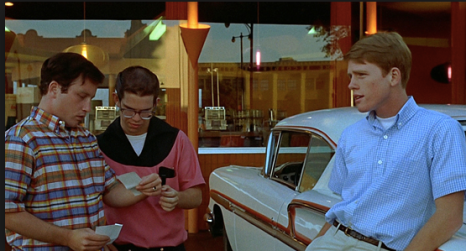 However, the film does not merely recycle these elements of the past: it also critiques them. Milner, with his white t-shirt, swept back hair and jeans, is a variant on the James Dean character Jim Stark from Rebel Without A Cause (1955) – a reference we will meet again in several of the other films I will discuss. The car race with which the film culminates is a blatant echo of the one in Rebel, even if it is bland by comparison. Yet while he is by no means as troubled as Jim Stark, Milner clearly belongs to the past: he knows that he is losing his authority and charisma, and his eventual off-screen death merely confirms the impossibility of his having a future. Meanwhile, it is Curt, with his 2CV and his plaid hippy-style shirt, who represents the future, and whom we follow at the film’s conclusion.

For the critic Barbara Jane Brickman, the film’s apparent nostalgia is not merely idealistic and utopian, but positively conservative. The film ‘lovingly celebrates an enchanted past’, but simultaneously mourns its passing: it expresses a reactionary wish for a world before the social revolutions of the 1960s. One key dimension of this, in Brickman’s account, is to do with gender: the ‘where are they now?’ conclusion pointedly excludes the female characters, and this reflects their more general marginalization or erasure within the film itself. 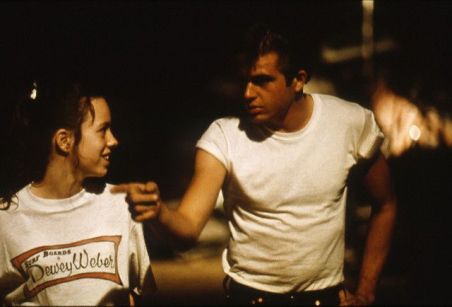 There is some truth in these arguments, but again they do not tell the whole story. Despite the film’s comic set-pieces, there is a sense of aimlessness about the characters as they cruise from one location to the next: when Curt asks his former girlfriend Wendy where she is going, she replies ‘nowhere’ – and he replies ‘you mind if I come along?’ These are lives of boredom and confinement, not of glamour and adventure. While Curt escapes, the other characters either remain trapped (Steve) or fail to progress into the future (Milner, Toad). Milner, in some respects the iconic representative of 1950s youth culture, is ultimately seen as a loser. Furthermore, at some stage in the proceedings, all the four male characters are humiliated or manipulated by women. Toad fails to get what he wants from the more sexually experienced Debbie, although she does take pity on him; Milner is impatient with Carol, but she gives a good deal more than she gets; Laurie provokes Steve’s jealousy in order to get him back; and Curt is briefly seduced by the impossible dream of the ‘goddess’ in the white T-bird. Of course, it would be ludicrous to claim that these are feminist images, or even pre-feminist ones (although I might make a case for Carol). Nevertheless, it is possible to detect more than just a conservative regret for the passing of the fifties here: there is also a sense of its inevitability, and even a promise that, in the guru-like words of the Wolfman, there is a ‘big, beautiful world’ ahead, at least for some.