Released in 1961, The Parent Trap was Mills’s second Disney film. Like Pollyanna, it was written for the screen and directed by David Swift, and was based on a novel called Das Doppelte Lottchen (Lotte and Lisa) by the popular German children’s author Erich Kästner. The film was a great success at the box office, generating almost ten times the revenue of Pollyanna.

The story begins when two very similar-looking girls, Susan and Sharon, meet at summer camp: both are played by Hayley Mills, using stand-ins and a variety of split-screen and matte effects. Unaware that they are in fact identical twins, the girls initially become rivals, pulling pranks on each other. Eventually they figure out that they are sisters, who were separated shortly after birth when their parents (Mitch and Maggie) divorced. They decide to switch places, eager to meet the parents they have never known, and return to each other’s homes in Boston and California respectively. They also hatch a plan to bring their parents back together, suspecting that they still love each other despite the hostility between them. However, they discover that Mitch is shortly due to re-marry, to a gold-digging younger girlfriend named Vicky. In order to stop this, Susan and Sharon decide to reveal their true identities, and the whole family reassembles in California. Through a variety of means, and with the help of their mother, the girls conspire to sabotage Mitch’s marriage plans. Just in time, they succeed: Mitch and Maggie rekindle their romance, and the film ends with their wedding, with the girls as maids of honour.

The Parent Trap might be described as a romantic comedy, although it is one in which children occupy the central roles. As in a conventional rom com, the inevitable romantic conclusion is deferred through a variety of obstacles, and the couple realize their true feelings for each other only at the very last minute. While the girls do eventually get in league with their mother, it is they who engineer the eventual reunion, and hence the reassembling of the family. As in the other films I have discussed, children possess a considerable degree of agency here: they often know more than the adults, extracting information from them that they can later use, and they deceive and manipulate them for their own purposes. In doing so, they often choose to play the role of the angelic, innocent child, even if the viewer knows better. Once again, the child (or children plural, in this case) plays the role of the healer, who magically rights the wrongs that have been caused by the mistakes or delusions of adults. While some adults can be trusted – the wise, benevolent grandfather, the honest family servant – others (such as those who run the summer camp) are seen as merely inept figures of fun.

Nevertheless, there are limits to this fantasy of child empowerment. The children do play mischievous pranks on Mitch’s villainous girlfriend Vicky, but they hardly ever challenge their parents’ authority: only at one point, where they resist their attempts to make Sharon return home, do they do so directly. Their means of rebellion may be effective, but they are essentially harmless and child-like; and they serve as a primary source of the film’s rather basic slapstick comedy. 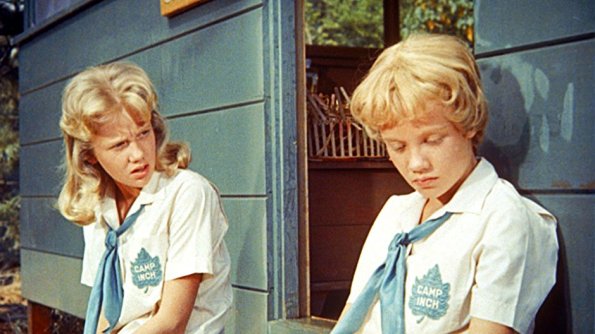 Furthermore, the children’s agency is entirely directed towards the reconstitution of the traditional nuclear family. Steven Watts describes The Parent Trap as ‘Disney’s ultimate expression of domestic ideology’; yet this is an ideology that appears to be implicitly under threat. At several points, the girls refer to the breakdown of the modern family, and its consequences for their friends. Thus, Susan remarks, ‘it’s scary how nobody stays together any more: pretty soon there’s going to be more divorces than marriages’. Both girls resist one potential solution to their problem, that of sharing the children: the ‘six month split’, they argue, would leave them feeling like a ‘yo-yo’ or a ‘bathroom towel’.

While this might be seen to reflect the social changes of the time, rates of divorce in the United States actually fell during the 1950s, and did not start to rise significantly until the 1970s. Yet for Disney in 1961, it appears that the family is in need of support. The embroidery sampler bearing the legend ‘Bless Our Broken Home’, which appears in the animated credits at the start of the film, is replaced at the end by one that says ‘Bless Our Happy Home’: ‘broken’ families, it seems, cannot be happy ones. And in case we missed it, the message is also reinforced by the song ‘Let’s get together’ that the girls perform for their parents, and whose melody recurs in later scenes.

The unspoken problem here, of course, is sex. It seems that Mitch has been sexually manipulated by his much younger girlfriend, whose motives are primarily financial (and who is supported in this by a scheming future mother-in-law). Although Mitch is conventionally masculine (and is described as such), this is not to say that Maggie herself is passively feminine: she repeatedly stands her ground against Mitch, and at one point even hits him in the eye. However, her determination is primarily focused on her desire to win back her man. With the assistance of the girls, she takes the lead in trying to rekindle their relationship. Following the not-so-subtle hints of her father, she adopts a new hairstyle and more sexually alluring clothes (‘using her femininity’ again); and when the children are off the scene, she engineers an embrace with Mitch while she cooks a meal for them. What the couple are missing, it appears, is not so much sex as romance; and the girls work hard to evoke the memories of their early relationship, for example by re-staging the scene of their first date. 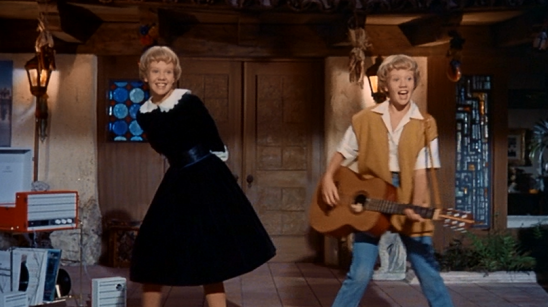 Significantly, however, Mitch seems just as interested in Maggie’s abilities in the kitchen. He looks back wistfully to the domestic realities of femininity ‘behind the scenes’ – the wet stockings drying in the bathroom, the blunt razor she has used to shave her legs. He even fondly recalls looking after the girls as babies, feeding them and changing their diapers. Even ‘masculine’ men need romance, it would seem, but they also crave a degree of domesticity. Women are by no means entirely passive here, and men are not merely hunters and warriors. Even so, the gender roles remain highly conventional: if women perform their domestic and romantic roles adequately, it seems that men can be drawn back into the traditional family.

The girls themselves implicitly understand some of this, but as children they remain outside it. In one scene, Sharon tells her father that ‘when a girl gets to a certain age, she misses her mother’. Mitch takes this as a cue for the ‘father-daughter talk’ about sex, and clumsily makes a start. However, it isn’t clear to either of them what they are actually talking about; and in any case, Sharon claims ‘I’ve known about all that for simply years’. Later, Sharon torments her father’s girlfriend by referring to the large numbers of other women he is seeing; and Vicky warns her not to ‘play with the big girls’. Yet for the moment, even at the age of thirteen, the girls remain children, whose knowledge of the adult world needs to be strictly limited.