In researching this essay, I took detailed notes on one of the historical compilation programmes that are increasingly used to fill the schedules on BBC4. Glam Rock at the BBC features clips from Top of the Pops and BBC concert footage from the period 1972 to 1977, alongside some from Cilla and the children’s programme Crackerjack. As well as the more predictable glam acts (T. Rex, Bowie, Roxy Music, Slade, The Sweet), it features others whose glam status I found rather dubious: Alice Cooper, Suzi Quatro, Chicory Tip, Alvin Stardust, David Essex, Elton John, Queen, Sparks, and others. Conspicuous by his absence was Gary Glitter, who in recent years has been repeatedly arrested and imprisoned for child abuse; and the leading DJ and Top of the Pops presenter of the time Jimmy Savile, whose posthumous exposure as a prodigious child abuser precipitated a major crisis at the BBC. Both, it appears, have been erased from history.

Many of the acts on the BBC compilation might more reasonably be described as mainstream pop or novelty bands (Chicory Tip, Mud); some fit better under the category of ‘revivals’ (such as Alvin Stardust, a latterday Gene Vincent impersonator, or Roy Wood’s Wizzard); yet others arrived relatively late in the day, assuming elements of the glam style, but quickly moved off in other directions (Queen, Elton John). Although they are generally included in histories of glam rock, I would even question whether Suzi Quatro, Alice Cooper and Sparks really belong in this category either. Quatro is often identified as the only female glam performer, although much of the point of her act was precisely that she was not glamorous or feminine, but actually very macho (at least in a sweaty leather-jumpsuit way). Alice Cooper placed a central emphasis on performance and visual display, but the band had little of the glitter or (despite their name) the gender ambiguity of glam. Aside from singer Russell Mael’s luxuriant hairstyle, Sparks were barely glam at all, either in their appearance (especially the weird-pervert look of fellow front-man Ron Mael) or in their music.

Interestingly, all three of these acts originally hail from the US, although Alice Cooper is the only one who remained there. It may be that I am chauvinistically insisting on some uniquely British quality of glam here – perhaps a kind of British theatricality. While there are some US stars who might comfortably be categorized as glam – especially Jobriath (who was almost unknown in the UK) – others don’t fit very easily. The New York Dolls, for example, or Wayne/Jayne County, seem to me to belong more to the art-world avant garde, especially that associated with Andy Warhol, albeit filtered through the tradition of amateur garage bands. There are definitely some visual trappings of glam here – especially the transvestitism – but this is infused with a self-consciously decadent sleaziness that is a very long way from the glittery, teen-oriented pop of the British acts, including Bowie. The most overt transatlantic connection here is Bowie’s role as producer of Lou Reed’s Transformer album (1972); but while Reed briefly adopted some glam characteristics – including make-up – he quickly abandoned them. It’s equally striking that very few British glam artists – again, with the exception of Bowie – managed to achieve any success in the US.

My instinctive responses to all this are certainly contentious, and I’ll leave the finer points to enthusiasts. However, they do imply that defining glam isn’t straightforward. Whatever else it may have been, glam was not primarily a musical genre. In terms of their music, all the acts featured in the BBC4 compilation could reasonably be described as ‘pop’ (rather than ‘rock’, I would argue). Most of the tunes follow the familiar chorus/verse structure of three-minute pop songs; there is an emphatic, thumping 4/4 backbeat; melodic hooks appear early, and are repeated many times; there are very few instrumental solos, and little elaborate ornamentation; and the lead vocal performances often feature affected Cockney accents, accompanied by high-pitched backing singers. Even so, there isn’t much in common between (for example) the quirky experimentalism of Roxy Music or Sparks on the one hand and the more mainstream, stomping pop of Slade or The Sweet on the other – especially if we look beyond the singles featured on Top of the Pops and sample their albums. Likewise, it’s hard to find much musical common ground between the 50s and 60s revivalism of Mud and Alvin Stardust and the increasingly symphonic stadium rock of Queen; or the grand melodrama of Bowie’s Ziggy Stardust period and the basic rock-n-roll of Suzi Quatro.

Some critics (such as Dick Hebdige) have argued that we should distinguish between what we might call ‘high glam’ (the more ‘arty’ or ‘intellectual’ acts such as Roxy Music and Bowie) and ‘low glam’ (the lumpen pop of Slade or Gary Glitter). However, others (such as Philip Auslander) have questioned this. Whatever may have happened since, in the early 1970s Bowie and Roxy Music were chart acts popular with (and partly targeted towards) a young teenybopper audience, even if they were popular with a slightly older age group as well. Furthermore, there are musical elements that do cut across this division, especially the tendency to revivalism: there is a decided influence of 1950s rock-n-roll and 1960s pop (as well as music of earlier decades) in the work of Bowie and Roxy Music, just as there is in glam pop bands like The Sweet and Wizzard. Nevertheless, this does seem to me to be a useful distinction, not least when one looks at the amount of critical commentary that artists like Bowie have generated, as compared with most critics’ continuing contempt for what is seen as disposable pop. 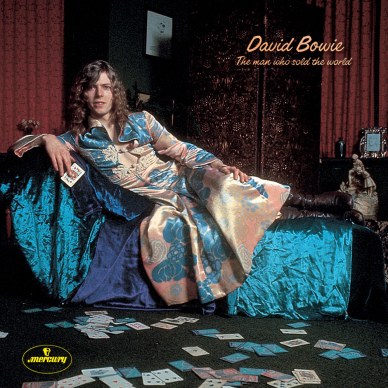 If it’s difficult to define glam rock as a distinctive musical style, the obvious point is that glam was identified principally by its visual and performance styles. For its almost exclusively male performers, glam was about dressing up, often in ways that are conventionally considered to be feminine, or in other forms of ‘fancy dress’. This entailed, among other things, particular shiny fabrics (satin, velvet, gold and silver lamé), fur and leather jackets, and shiny or luminous platform shoes, and sometimes extended to feather boas and headdresses. Men wore copious amounts of lurid make-up, as well as glitter and sequins on their faces or in their hair. Favoured hairstyles included luxuriant ringlets and layered ‘feather cuts’, along with coxcombs, often with brightly coloured hair dye. While some performers appeared in dress-like tunics, this rarely extended to full-on transvestitism, although in some celebrated instances (such as the cover of Bowie’s 1971 album The Man Who Sold the World) it did. The androgyny (or indeed effeminacy) of glam performers was also apparent in their body language – in styles of movement and dance, in facial expressions (especially for the benefit of television cameras), and in apparently seductive looks and gestures. The label ‘camp’ is routinely applied here – although, as we’ll see, this is a complex and ambivalent term.

Of course, these tendencies were by no means new in popular music. Elvis Presley and Little Richard wore make-up and hair dye in their time, as well as outrageous gold lamé and satin outfits – as indeed did British stars like Billy Fury. Mick Jagger famously wore a dress (or at least a frilly tunic) over his trousers when he performed in London’s Hyde Park shortly after the death of fellow Rolling Stone Brian Jones. However, one would have to look well beyond the pop mainstream for anything approaching the outrageous theatricality, and especially the androgyny, of glam.

It is perhaps an exaggeration to say that glam wasn’t about the music; but the music itself clearly didn’t matter as much as it did for other styles. Of course, it is possible that ‘glam rock’ was little more than a convenient marketing label for performers who happened to emerge at around the same time. Glam briefly provided a collective description for acts that might seem in retrospect to have had quite different intentions – from the mainstream or novelty pop of Mud and Slade, through to the proto-Marilyn Manson horror shows of Alice Cooper, or the seemingly ‘decadent’ art rock of Lou Reed’s Transformer. The visual elements of glam may have been little more than a necessary gesture of the times: appearing on Top of the Pops in particular might have required a pair of orange satin trousers and a layer of heavy make-up, or even a feather headdress, even for those who might otherwise have scorned such things. Indeed, it’s notable that even among the bands I would confidently categorise as glam, not all their members appeared in this way: both Slade and The Sweet, for example, had one member in particular who assumed the outrageous ‘glam queen’ role (Dave Hill and Steve Priest, respectively), while the other members dressed in more idiosyncratic or simply anonymous ways. Some glam performers – Bowie’s lead guitarist Mick Ronson, for example – might have worn gold lamé jumpsuits and copious make-up, but their body language remained that of the strutting, macho guitar heroes of heavy rock.

If glam was principally a spectacular, visual phenomenon, it was bound to depend very heavily on visual media. Top of the Pops was effectively compulsory viewing for young people during this period: by the late 1960s, it had seen off the competition, and was enjoying a regular audience of around 17 million (almost one third of the population). Dismissed by many counter-cultural commentators as hopelessly sanitized and staid, it was the absolute opposite of credibility for progressive ‘underground’ acts, many of whom refused to appear – effectively leaving the way clear for glam. TOTP had the power to break new acts to a mass market, and it was by no means ignored even by the more ‘high glam’ acts such as Bowie and Roxy Music. Well before the advent of music video and digital media, its presentational styles were necessarily very limited; although since the performers were required to mime to recordings, they were accordingly more free to focus on aspects of visual appearance. While more middle-of-the-road, conservative performers were regularly featured alongside youth-oriented acts, there was always the abiding hope (or, for some adults, the fear) that it would break with decorum. David Bowie’s famous performance of Starman in 1972, when he oh-so-causally draped his arm around Mick Ronson’s shoulder, was one such moment of outrage that struck fear into the hearts of an older generation – or at least, so the mythology suggests (I doubt that my dad would have liked it, anyway).

While there were also glam movies – Bolan’s rather embarrassing Born to Boogie, David Essex’s Stardust and even Slade’s more realistic picture of the music business, Flame – most dedicated fans were likely to rely heavily on print media. Although some established music papers – most notably Melody Maker – were keen to capitalize on the growing popularity of glam, the most striking development here was the growth of magazines for teenage and pre-teenage girls. While established romance magazines were actually in decline, those featuring musical content – and especially pin-up posters – grew phenomenally in the early 1970s: Jackie, the market leader, had a circulation in 1974 of over 700,000, and estimates suggest that around 40% of the 10-25 age group would have read such magazines on a regular basis. Much of their appeal was clearly to do with the colour images of male pop stars; and while some were ‘boy-next-door’ types (David Cassidy, the Osmonds, the Jackson Five), many were heavily made-up older men dressed in excessively ‘feminine’ ways. At least on the face of it, this seems a curious, paradoxical phenomenon; and it is one I intend to explore more fully later in this essay.