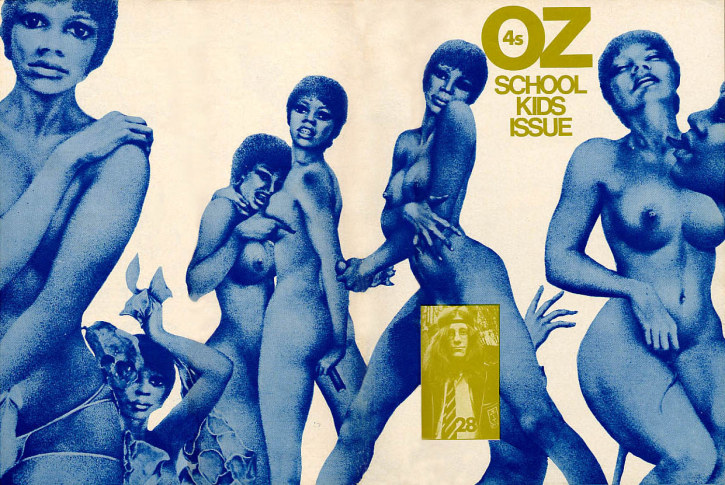 On June 23rd 1971, a momentous trial began at London’s Old Bailey, the Central Criminal Court of England and Wales. In the dock were three young men, Richard Neville, Jim Anderson and Felix Dennis, the editors of Oz, an ‘underground’ magazine. They faced charges relating to issue 28 of the magazine, published in May of the previous year as Schoolkids Oz. They were accused of producing an obscene publication and sending it through the mail, for which the maximum penalties were three years and one year respectively; and, more broadly, of ‘conspiring… to produce a magazine containing divers lewd, indecent and sexually perverted articles, cartoons, drawings and illustrations with intent thereby to debauch and corrupt the morals of young children and young persons within the Realm and to arouse and implant in their minds lustful and perverted desires…’ – an archaic and rarely used charge for which the maximum penalty was life imprisonment, at the discretion of the judge.

The Oz Trial was the longest-ever obscenity trial in British legal history, lasting nearly six weeks. Both at the time and subsequently, it assumed almost mythological proportions. Yet while the trial focused in great detail on the parts of Schoolkids Oz that were deemed obscene, relatively little attention was paid – either at the time or afterwards – to the publication as a whole. At the invitation of its editors, Oz 28 had been produced (at least in part) by schoolchildren; and a good deal of the outrage that it provoked was to do with its affront to traditional notions of what was appropriate for children to see. As such, it raises some interesting questions about the place of ‘childhood’ – that is, of ideas of childhood, rather than the experience of actual children – within the counter-culture of the time. In this essay, I want to explore some of the tensions and contradictions that were at stake in these ideas, firstly in general terms and subsequently in relation to the specific instance of Schoolkids Oz.

What was the counter-culture?

The Oz Trial has been regarded as a defining moment in the history of the counter-culture in Britain. For Richard Neville and his defenders, the prosecution was not primarily about obscenity at all: rather, as he announced in his opening speech, it was ‘a political occasion’. The trial represented an attack on an ‘entire community’ – that is, on the hippies, or the counter-culture – and, more broadly, on the very idea of freedom itself. For others, looking retrospectively, it was already the beginning of the end – the conclusion of a more expansive, optimistic period, or at least a moment where the counter-culture in Britain moved into a new, darker phase. I’ll return to these arguments towards the end of this essay, but it makes sense to begin by exploring some key terms.

Personally, I was just a few years too young to be an authentic hippy; but even so, it’s genuinely difficult to define or account for the counter-culture without the distortions of hindsight. On the one hand, there is a kind of retrospective nostalgia on the part of many of those who participated at the time, as well as a kind of ‘retro-chic’ promoted (more or less ironically) by recurrent hippy revivals. On the other hand, there is the luxury of condemnation: the word ‘hippy’ has become so encrusted by decades of contempt (think of the punks’ injunctions to ‘kill a hippy’) that it seems almost indelibly dismissive. While there are now some very useful oral histories of the period, there is bound to be a problem of inaccurate memories: indeed, as the saying goes, if you can remember the 1960s, you weren’t really there in the first place.

In this context, Timothy Miller’s book The Hippies and American Values, first published in 1991, is especially useful. Miller presents an analysis of the hippies in their own words, drawing on an extensive review of the American underground press during the latter half of the 1960s, as well as some related publications by its key exponents. Miller explores hippy pronouncements in relation to the unavoidable trinity of sex, drugs and rock-n-roll (of which more below); yet in the process, he identifies the hippies’ broader ethical and political challenge to the mainstream culture. The hippies questioned dominant values of scientific rationality, and the emphasis on technological progress; and they sought to find alternatives to what they regarded as the materialistic, competitive ‘work ethic’ of capitalism. They proclaimed the need for personal freedom, especially in relation to sexuality, and they sought to recover a more spiritual, but also more natural and pleasurable, approach to everyday life.

These opposing sets of values might be schematically presented as follows: 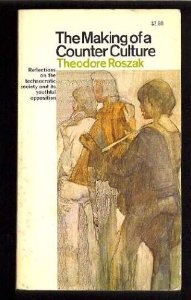 The term ‘counter-culture’ was first used by the academic Theodore Roszak in his book The Making of a Counter Culture: Reflections on the Technocratic Society and its Youthful Opposition, published in the US in 1969. Roszak and others presumed that there was a fundamental unity in the counter-culture, or at least attempted to write one into being; but in reality there were always different, overlapping sub-cultures within the counter-culture. As Miller suggests, the counter-culture was diverse and inconsistent – and indeed, often contradictory. In particular, he points to a fundamental distinction that was apparent to many commentators at the time, and that is important to the discussion of childhood that follows below: this is the distinction between what might loosely be called the ‘new left’ and the hippies.

To put this (again) quite schematically, the new left was primarily concerned to challenge the dominant political order, while the hippies were more interested in creating alternatives to it, by turning away or ‘dropping out’. Many self-professed hippies were very suspicious of organized groups of any kind – although one might well argue that hippies themselves were highly conformist in their own way. Many hippy commentators saw the new left as violent, old-fashioned and anti-pleasure; while many on the new left saw the hippies as escapist, self-indulgent and infantile. The hippies claimed to be the real revolutionaries: they were behaving as though the revolution had already happened, whereas the new left was acutely conscious that it had not. While there were overlaps here – both hippies and new left radicals opposed the Vietnam war, for example, as well as punitive drug laws – there was also a good deal of mutual hostility between them.

The eventual fragmentation of the counter-culture in the early 1970s can partly be understood in terms of an intensification of this fundamental opposition. On the one hand, many of the original hippies turned away from mainstream society in a more fundamental way, by moving out of the city and going ‘back to the land’, forming rural communes. Yet on the other, some new left activists, frustrated by the slow pace of change, took to more violent methods, with the emergence of terrorist groups such as the Weathermen, the Angry Brigade and the Red Army Fraction (the so-called Baader-Meinhof Gang). While both groups wanted revolutionary change, there was increasingly little in common between them.

Miller’s account is based almost entirely on US sources (although he does occasionally quote Richard Neville’s influential book Play Power, which I’ll discuss below). The situation in the UK was at least somewhat different. The term ‘counter-culture’ was not widely used here. Among the writers and supporters of Oz and related publications, the preferred term was ‘the underground’ or ‘the alternative society’ – which perhaps suggests a less oppositional, but nevertheless still broadly political, approach. The term ‘hippy’ was not yet seen as disparaging, although it generally seemed to refer more to matters of cultural style and taste. Despite the enthusiasm for sex, drugs and rock-n-roll, and the apparent proliferation of festivals, communes, ‘arts labs’ and alternative publications, the underground did not provide – or seek to provide – a singular or consistent programme or rationale. Yet here too, we can detect a fundamental tension between the cultural and the political elements of the counter-culture, between the hippies and the new left – or (as Miller also puts it) between those who were more inwardly or more outwardly focused. This was a tension that frequently surfaced in publications like Oz.