As I’ve noted, the issue of ‘encouragement to view’ was a key point of contention in the debates about the effectiveness of Sesame Street. Right from the outset, CTW knew that it would need to make special efforts to promote the show among the communities that it was specifically targeting. It established a ‘Utilization Department’ (later called ‘National Field Services’ and eventually – from about 1971 – ‘Community Education Services’, CES), with a substantial budget, and appointed Evelyn Payne Davis, a high-profile African-American community organizer, to run it.[i] The department focused quite specifically on poor areas with significant minority populations, mostly in inner cities, although it later extended to the rural poor in Appalachia and to Native American reservations. (Of course, it’s hard to see why any of this would have been seen as necessary if Sesame Street was not aspiring to reduce the differences between disadvantaged and advantaged children…). This work has not been well documented, but it offers a very interesting case study – and perhaps even a ‘model’ – of how a medium like television might be used to support wider social action.

The initial task of the Utilization Department was simply to raise awareness of the launch of the show, and encourage people to tune in. CTW knew that parents in poor inner-city neighbourhoods were less inclined to watch public television channels, and might need help in locating the broadcasts on their dials. Most unusually, mainstream channels like NBC and CBS lent support to this promotional effort, running a pilot and spot announcements.[ii] Following Davis’s appointment, a few weeks before the first screening, teams of volunteers were sent out to distribute leaflets, convene meetings of parents and teachers, and take mobile trucks with promotional films into poor neighbourhoods. People were trained in how to tune in to UHF stations, as well as being informed about the show’s educational aims. Although Sesame Street was not intended for use in schools, publicity was also sought through networks of parent-teacher associations, and in presentations to staff in Head Start centres. Jimmy Booker, an African-American PR consultant, was brought in to network with key black organizations like the Urban League and the National Council of Negro Women, and secure positive coverage in black-oriented newspapers and magazines like Ebony.

Once the series went on air, these promotional activities were ratcheted up.[iii] Local offices were set up in five cities, and this was extended to fifteen for the second season. Community-based viewing centres were established, particularly for those who might not have easy access to the broadcasts at home, and for children who were not in day care: initially run by volunteers (some from the neighbourhood youth corps), they met in libraries, public housing projects, churches, storefront premises, hospitals and health care facilities, and even in prisons. Mobile viewing centers were sent into some inner-city neighbourhoods, and people were encouraged to donate any surplus television sets. The viewing centres in turn distributed information leaflets to parents’ groups and Head Start centres. In some instances, home viewing centres were established for people who were reluctant to attend a more formal neighbourhood meeting; while ‘Sesame Mothers’ programmes in Los Angeles and Chicago trained mothers to run viewing groups. There were live appearances of cast members, exhibitions and posters, training workshops and films, and a range of published materials, including a monthly ‘parent/teacher guide’.

The scale of this activity is striking. For example, in New York, and later in other cities, Summer and Day Camp programmes were set up with the Neighborhood Youth Corps, which trained teenage volunteers to work with preschoolers: in 1971, 1200 young people and 15,000 children were involved.[iv] A CTW press release in 1971 claimed that 2000 viewing centres had been established, reaching 20,000 children; while an article published in 1974 claimed that over 100,000 volunteers had been recruited since the programme’s inception.[v] 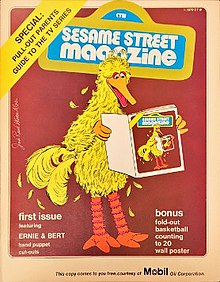 As the work progressed, there was a growing effort to provide additional support for parents in actively using the show with their children. It was well known – and the ETS studies certainly confirmed it – that the educational value of television was enhanced if parents watched with their children, and discussed and extended what they saw afterwards, even in quite informal ways. Although some of the ancillary materials (like the Time-Life books and kits) were only within reach of more affluent parents, inexpensive Sesame Street books and other print materials were also produced and distributed, in some instances for free. For example, Mobil Oil funded an inexpensively produced newsletter (available in supermarkets and stores) containing information about the educational features of upcoming episodes, and suggestions for parents on how to follow them up. There were cheaply produced, hand-made booklets with titles like ‘A Manual of Things to do when Sesame Street is Over’ or ‘Sesame Street at Home’, some of which contained hundreds of detailed suggestions for games, puzzles and play activities, as well as ‘scripts’ for educational dialogues between parents and children.[vi] Five million copies of the Mobil booklet were distributed, while CTW’s own ‘Parent Teacher Guide’ apparently hit six million.

Some of this activity seems to have been fairly uneven, and even chaotic at first. It was hampered by familiar problems with outreach work, such as intermittent contact, a lack of adequate facilities, and the difficulties of working with volunteers. However, it was steadily professionalized. Paid local ‘utilization directors’ (or ‘field service co-ordinators’) were appointed, and required to produce regular, detailed reports on their work.[vii] As well as convening viewing groups, the job included liaison with community groups and other local 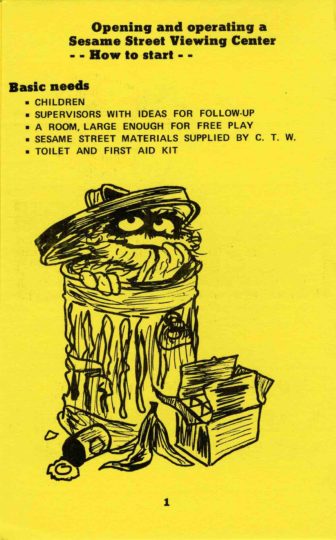 grassroots organizations (such as women’s clubs, Vista and the Girl Scouts); securing positive media coverage in newspapers and on radio; providing training and question-and-answer sessions for teachers, health care workers and others; and, as far as possible, conducting research on people’s responses to the programme. Local co-ordinators were provided with their own training manuals, newsletters and speakers’ kits, as well as films, filmstrips, books and games to use in workshops. Achieving ‘buy-in’ from local communities was crucial, and representatives of key groups were invited to join their advisory and planning committees.

In principle, the mission of CES was in line with Cooney’s ‘both/and’ approach: its mission statement talked about reaching ‘communities around the nation, with an emphasis on economically deprived neighborhoods’.[viii] In practice, however, these activities were almost exclusively targeted at disadvantaged children and their parents.[ix] Some of them seem to have been premised on the kind of ‘deficit models’ I have identified. Rather than simply encouraging parents to watch and use the show, some of the local offices also set out to teach ‘good parenting’.[x] A proposal for CES activities in 1971-2 exemplifies this, describing ‘parent workshops intended to create a positive educational relationship between parent and child, the lack of which is likely to be one important way to distinguish the “disadvantaged” from the “advantaged” child.’[xi] On the other hand, some felt the aim was simply to build such parents’ confidence: a training manual from the same period stressed that ‘it is necessary to emphasise to [disadvantaged] parents the fact that they have the skills and knowledge that are certainly worth sharing’.[xii]

A more substantial history of this work remains to be written; and there seems to have been little systematic, independent evaluation. One article, published in 1970, offered a rather sceptical account of the outreach programme, at least in libraries: it suggested that most libraries had used Sesame Street as ‘just one more promotion for the traditional, middle-class story hour’, and that ‘concerted efforts to help disadvantaged children’ were ‘virtually nonexistent’.[xiii] This was clearly not CTW’s intention; but it seems likely that these activities took very different forms in different locations, and had different outcomes, however tightly they were managed. In the early 1980s, the CES mutated into the Sesame Street PEP (Preschool Education Program); and while this work was much more institutionally-based, there has been no conclusive evaluation of its overall impact.[xiv] More significantly, in terms of my interests here, the focus on disadvantaged children appears to have almost entirely disappeared from view.

[iii] Information on this work comes from published sources (especially Morrow and Davis), from Long’s PhD thesis, and from the UM/CTW archives (box 51 contains several of the key documents). I have also used an interview with Evelyn Davis in Essence magazine, March 1971; an article by Tony Best, ‘On the other side of Sesame Street’, in American Education 10(4), May 1974; and a more sceptical account ‘Sesame Street – What Next?’ from Library Journal, November 1970: 3958-3961.

[v] Press release accessed in the Paley Center microfiche archive; for the 1974 article, see Best, above.

[vii] Many of these reports from local offices are contained in the UM/CTW archive, along with key documents like a ‘National Utilization Program Manual’ from 1971-2 (box 232).

[ix] This is particularly apparent from a large glossy brochure called ‘Sesame Street in the Community’, published by CES in 1971, whose photographs are almost exclusively of African-American children.

[x] Although an early proposal, first mentioned in Cooney’s early reports to Carnegie, for a parallel show directed at parents, was dropped – largely, it appears, due to lack of funds.

[xiv] See Yotive, William and Fisch, Shalom ‘The role of Sesame Street-based materials in child-care settings’, in the book edited by Fisch and Truglio (2001).