If the social and educational problem to be addressed was defined in particular ways, therefore, so too was the potential solution. The particular characteristics of this approach can be brought into sharper focus if we contrast it with the arguments of one of Sesame Street’s early critics, the radical educator John Holt. In an article published in 1971, Holt offered some forthright criticisms of the basic aims of the show – although his overall tone was one of disappointment at what he saw as a missed opportunity. He began by challenging the deficit model that he saw as the show’s starting point. ‘Poor kids and rich kids are more alike when they come to school than is commonly believed,’ he argued, ‘and the difference is not the main reason poor kids do badly when they get there. In most ways, schools are rigged against the poor; curing ‘learning deficits’ by Head Start, Sesame Street, or any other means, is not going to change that.’ In setting out to prepare children for school as it is, Holt argued, Sesame Street avoided the challenge of offering children something different – the things that schools may never teach.

Holt also challenged the programme’s basic pedagogy. Rather than showing children actively engaged in figuring things out for themselves, it simply showed them ‘learning Right Answers… to leading questions put by adults’. Sesame Street, Holt argued, was like ‘a conventional school run by supergifted teachers’:

It is full of little invisible lesson plans, complete with behavioral objectives and motivating devices. It assumes, like most schools, that nobody ever learns anything by himself, naturally, incidentally, as a byproduct of doing or attending to something important to him; that on the contrary, everything, however trivial, must be deliberately taught, and will be taught best if it is taught all by itself, cut off from all connections with the rest of life.

Holt went on to develop a detailed critique of the programme’s approach to teaching reading and basic mathematics, but he also offered some specific (and quite realistic) suggestions for an alternative approach. Far from dismissing television as a medium, he suggested that it could be used in more challenging ways: ‘The screen is almost never used, as it might be, to convey ideas, information, relationships that cannot be conveyed with words — ideas that would be of far greater subtlety, complexity, and power.’ Television, Holt argued, offered a more radical possibility: 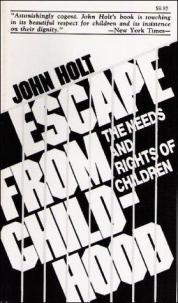 Sesame Street still seems built on the idea that its job is to get children ready for school. Suppose it summoned up its courage, took a deep breath, and said, ‘We are the school.’ Suppose it asked itself, not how to help children get better at the task of pleasing first-grade teachers, but how to help them get better at the vastly more interesting and important task — which they are already good at — of learning from the world and people around them.

Underlying Holt’s argument is a radical ‘liberationist’ view of the child as a social actor – a view that is elaborated in several of his books, most notably Escape from Childhood: The Needs and Rights of Children, published in 1974. In terms of the familiar binary, Holt regards the child as a being in the here-and-now, not as a becoming, who is developing towards a finished adult state. By contrast, for Sesame Street, any ‘liberation’ the child might need or desire is only to be achieved in the future, once they have learned their lessons.[i] While Holt’s main criticisms might well be viewed as irrelevant or utopian,[ii] they do throw into relief some of the fundamental constraints and limitations of Sesame Street’s aims and methods. Of course, for Cooney and her colleagues, there was no alternative to working within what they saw as the bounds of the possible: using television in the more radical way Holt was indicating was never an option.

To what extent could an initiative like Sesame Street ever have solved the social and educational problems its founders identified? For many of its critics, the idea that television might offer a solution of any kind was highly questionable. Prior to this point, educational television had been mostly made for use in schools: it was poorly funded and little used, and rarely contained the kind of entertaining elements that were likely to attract a wider audience. Yet as we’ll see, there was also a fundamental contradiction in targeting a specific social group using a medium that was universally available; and once federal and philanthropic funding was withdrawn, the programme would need to maximize its audience in any case, simply in order to survive. In this situation, closing or narrowing educational gaps was likely to prove difficult, if not impossible.

One might well argue – as critics like New York Times journalist Linda Francke did at the time – that a high-profile television show provided politicians with a useful means of being seen to address the problem of educational underachievement. More concerted educational efforts – such as free, universal pre-school provision – would have been much more costly, and were considered politically impossible. Initiatives like Head Start were only ever intended to reach a relatively small fraction of the age group; by contrast, Sesame Street could potentially reach all of them, in a very visible way. Yet there was clearly a danger here that Sesame Street might be little more than a kind of token gesture.

For Cooney (who had been brought up in a devout Catholic family, and was later associated with the evangelical Christopher Movement) and for philanthropists like Morrisett, Sesame Street was a means of doing good for poor children, which amounted to a kind of missionary crusade. The show was funded primarily on the basis that it was going to ameliorate the apparent crisis in public education; and beyond that, to provide at least partial compensation for disadvantage. This was the ‘policy button’ that Cooney and Morrisett pressed repeatedly in their efforts to obtain funding, especially from the federal Office of Education and the Ford Foundation. As we’ll see, they realized fairly soon that bridging this gap was unlikely to be straightforward, and sought to row back from such claims – in some cases, denying (quite falsely) that they had ever made them.

I’ll come back to the controversies that developed around this issue in due course; but ultimately I don’t think it’s helpful to see any of this as a matter of individual hypocrisy. The claims and compromises that CTW had to make were partly a result of structural and economic constraints: getting the show on the air, and ensuring its survival, required them to make some large promises that they could never have fulfilled. Yet these difficulties were also political; and in this respect, the contradictions of Sesame Street need to be seen as symptomatic of the broader limitations of liberal social reform at the time.

[i] Escape from Childhood (New York, E.P. Dutton, 1974). I have discussed Holt’s arguments for ‘children’s liberation’ in a little more detail in another essay in this series, ‘Children of the revolution? The hippy counter-culture, the idea of childhood and the case of Schoolkids Oz’, at https://davidbuckingham.net/growing-up-modern/children-of-the-revolution-the-hippy-counter-culture-the-idea-of-childhood-and-the-case-of-schoolkids-oz/

[ii] They are effectively dismissed as such by Lesser in Children and Television, Chapter 7.